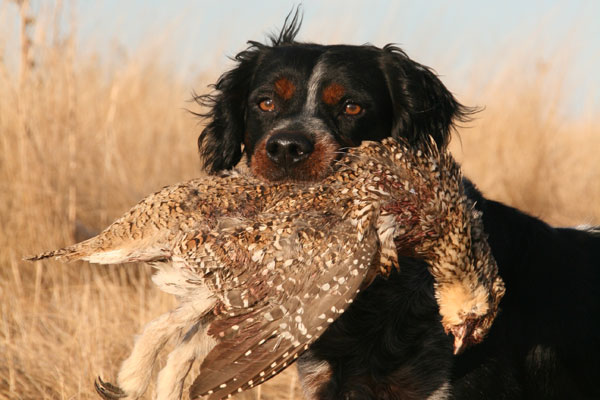 Buying a French Brittany Hunting dog? Do you know what to look for in a hunting dog? Our guide gives you the facts & information you want to know.

French Brittany hunting dogs, French Brittany spaniels, and for that matter all dogs are descendents of the wolf.  DNA tests have indisputably shown that the common domesticated dog, in its various sizes, shapes and colors shares a common ancestry with the wild wolf. They are both carnivores – meat eaters and, in the distant past lived by hunting. As to how and when these wild animals became “man’s best friend” is buried in the sands of time but some of the long lost traits of hunting are partially manifested not only in the French Brittany hunting dogs but in all species of hunting dogs.

The Brittany Province of France seems to be the place from where the French Brittany hunting dogs originated. There are, of course, other schools of thought that try to bond the origin to Britannia by the phonetic resemblance of the name – Brittany. Despite the confusion surrounding the origin of the French Brittany hunting dogs, the fact remains that the dogs have a superb and keen sense of smell, a common ability shared with the other bird dogs and hunting dogs like the pointers and setters of the coastal regions of France, Holland etc.

Though French Brittany hunting dogs are essentially outdoor animals, they can be raised in apartments also. People who take to the hobby of hunting, probably as an amateur sport, and who live in apartments can keep these dogs and use them for hunting – in fact these dogs are sometimes called “weekend gun-dogs”.

French Brittany hunting dogs, like French bulldog puppies, have also proven themselves to be superb family animals, friendly, loyal and gentle. These dogs are sensitive in nature and have to be handled with tenderness. They love fun and are boisterous with a strong desire to please their masters. They abhor rough handling and if so treated develop into timid and shy creatures and as such remedial training must be handed out with sufficient warmth and compassion.