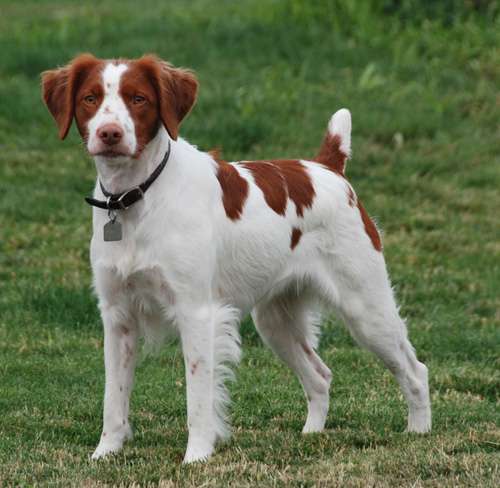 The outdoor man with hunting as a hobby or one of many including the maintaining of good breed dogs will probably go in for a French Brittany Spaniel as a companion and an astute hunter. The French Brittany Spaniel is thought to be a cross between the Orange & White Setter and a French Brittany hunting dog native to the Brittany province of France. The identity of the French breed is indeterminate. Widespread speculation points to the possible mating of native spaniels of Brittany with English Setters or Pointers since they work in a similar manner.

Whatever the origin of the French Brittany Spaniel, the dog has all the appearance of a strong, enthusiastic & dynamic one befitting an animal extensively used for hunting. The dog is of medium size, 30 to 40 lbs. and 17½” to 20½” high at the shoulder, closely knit and solidly built. The French Brittany Spaniel is endowed with long legs and being quick in movement, is capable of covering ground with ease and agility. The face of the French Brittany Spaniel sports an intelligent look and this look radiates from eyes that could be either tawny or hazel, depending on the color of the coat – which is generally either Orange & White, Liver & White or B&W. The nose, similar to the eyes, is also contingent to the color of the coat and is more or less predominantly dark. The triangular shaped ears are somewhat short, set high, a little fringed and fall close to the head.

The French Brittany Spaniel not only looks intelligent but its intellect actually matches its look and is extremely amenable to training as it is a dog which is eager to please. A gentle and devoted dog, always of a fair disposition but also vigilant it is also good natured. Sadly, they become nervous and shy if roughly handled. A few are restless and every now and then become agitated. This is why it is important to buy your dog from well reputed spaniel & French bulldog breeders.

The French Brittany Spaniel is a robust and healthy one. A few are prone to hip dysplasia and seizures but these are just minor aberrations. Minimum grooming is all that is required to keep its coat neat and shiny and it is also a light shedder.

Now that hunting is getting regulated to shorter ranges because of dwindling open spaces and a proliferation of fences, the French Brittany Spaniel is gaining more popularity as a hunting dog owing to its shorter range. They can also be well maintained indoors.