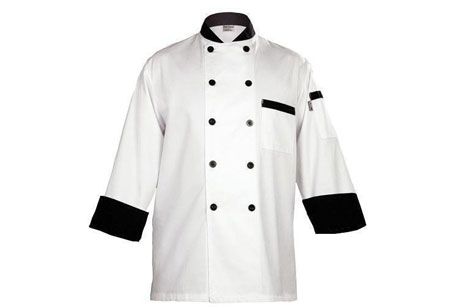 The traditional French chef’s uniform is made up of the hat, which is known as a toque, the white double-breasted jacket, and the checkered pants.

The great thing about these double breasted jackets is great because they can be worn in reverse in order to hide any stains from cooking. These are made from a thick cloth made of pure cotton. These do not just look good, and they don’t just work to hide stains, they have other uses too. For example, the thick cotton protects the chef from the constant heat of the stove as well as being burned from hot splattering substances such as oil, water and sauces.

In the past these chefs’ jackets included knotted cloth buttons that were also practical because they did not melt, and they were sturdy enough to survive constant use and washing.

Of course these jackets are sometimes supplemented with traditional aprons which are also made of a thick cotton cloth.

The pants that are worn by professional French chefs are checkered in pattern. This is because this pattern is best at hiding any food stains that occur. But, chefs rarely wear black pants and jackets because the white is meant to signify the importance of cleanliness. This is even more importantly worn by the head or executive chefs who are often seen by the restaurant diners.

However, in modern days chefs all over the world, and not just in France, have started to create their own style of uniform by making alterations to the more traditional uniform described above. The variations normally exist in cut, colour, design and patterns and will often include the logo of the restaurant.

But, there are some chefs, particularly traditional French chefs, who favour the traditional white jacket and checkered pants. They prefer these because they favour tradition and retaining some of the culture of the culinary profession.

Another famous French chef, Georges Auguste Escoffier, was the one who introduced the uniform to the rest of the world when he imported it to London when he started working at the Savoy.

It is not easy for general people to get their hands on professional chef jackets as these are usually made to order. So one cannot find these being sold in a department store in a shopping mall. Also, because these days chefs like to customise their uniforms they will have their own special designs made.