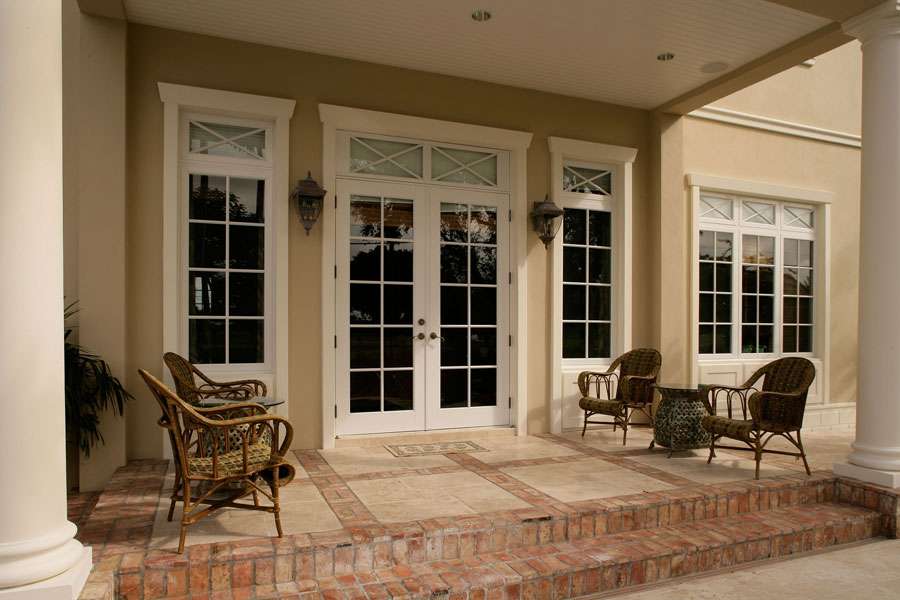 French door transoms are not only functional but also stunning pieces of artwork that can render an eye-catching adornment to entry French doors. Read our guide for more facts and information…

Transom refers to the window above the door, attached to the upper horizontal crosspiece of the door. Also synonymous with fanlight, a transom is an interesting addition to French doors. It not only forms an important architectural highlight but also improves the utility of the entire door unit by allowing better ventilation, lighting and privacy.

Early transoms date back to the Georgian style of architecture. They were used to fortify mullions in Gothic structures, and were also common with spire lights and belfry windows. Traditional transoms resembled the shape of a fan, due to which they are also called fanlights. The French term ‘vasistas’ also refers to transoms. Over time transoms became a common feature in French doors and all kinds of windows.

Transoms give an outstanding look to French doors, particularly entry doors as they can never go unnoticed. They are built to blend with the door and have ornate glass panes that make them even more conspicuous. When light passes through the beveled edges of the glass, a colorful spectrum is cast into the interior of the home. Transoms are available in a beautiful range of shapes, such as rectangular, elliptical and semi-circular shapes. Glass design options allow for a good degree of customization to meet the consumer’s design needs. Manufacturers also offer several widths, so that they are well-configured with the entryway. Various methods, such as Tiffany style techniques and hand-crafted methods are employed to design the glass pane, reproducing timeless traditional patterns.

Transoms are mainly used to allow cross-ventilation in the absence of air-conditioning in homes and offices. Their miniature size and high location allows for privacy while letting in light and circulating air. Triple-glazed glass panes are becoming widespread in modern transoms, and they serve to reflect a considerable amount of solar heat, thereby saving on energy costs. Direct-set glass transoms are created by glazing the glass panels into the transom’s wooden frame, whereas sash-set glass models are created by glazing the panels into a sash and then installing them into the frame. While the former is an economical option, the latter is sophisticated as it allows for vertical alignment of panels with those of the door or sidelight panels below.

Online vendors offer photographs of French door transom designs on their websites, enabling customers to make a better choice. They also offer custom shapes to fit different installation needs. Today, transoms are significant architectural elements that adorn entranceways, as they contribute a lot to the aesthetics of the home.