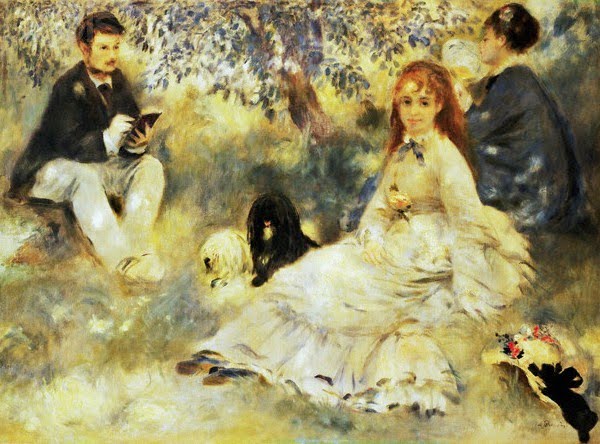 Want to know more about the French Impressionist born in 1841? Read on for facts and info on Pierre Auguste Renoir who is regarded as the father of impressionism…

The year 1841 witnessed the birth of Pierre-Auguste Renoir who is regarded as the father of French impressionism. Over his artistic career the French impressionist painted over 6,000 pieces which are held up in museums around the world today. He was the fourth child of his family who was born to a father that worked as a tailor and a mother who accompanied him as a seamstress.

He grew up in Paris where his family had moved when he was four years old. They stayed in his apartment at Louvre which happened to be a royal palace. He first entered the world of art as a vocalist. Renowned composer Gounad actually arranged musical education for him as well as a place in the Paris Opera. However Renoir opted out of the music business at the age of 13 and ventured into painting as an apprentice porcelain painter where he continued for about five years.

During his time as a porcelain painter he displayed his amazing skill which earned him the nickname of Mr Rubens. He also made a considerable amount of money through his artwork. He was renowned for painting portraits of Mary Antoinette on white porcelain cups. However his liking for painting and fine art continued to grow and he kept on visiting museums during his lunch hours to view the works of formidable French artists such as Boucher, Fragonard and Delecroix. The fountain of the innocents, a 16th century sculpture was amongst his favorites. Renoir left the porcelain business, in fact they had automated processes  introduced following which he started painting murals for various cafés. He joined the art school of Charles Gleyre in 1862.

At the school he was taught through traditional methods and he particularly gained expertise in outdoor sketching. He studied at the school alongside other great artists such as Alfred Sisley, Claude Monet and Frederic Bazille. Together with these individuals Renoir met up with a number of leading writers, critics and artists like Edgar Dégas and Edouard Manet. It is with this unique group that the birth pangs of impressionism were laid down in the year 1869.

Renoir had a passion for figure painting. He developed a liking for one of his models by the name of Lise Trehot. Her dark features and rounded figure attracted the artist who took her as his mistress and made over twenty paintings of the model in less than seven years. In 1870 the artist was called up to serve in the army during the Franco-Prussian war.

He spent his time training horses in the Pyrenees but stayed far away from the action on the battlefield. One of his close friends and associates in his profession Fredric Bazille lost his life during the war. He returned to Paris in 1871 and together with Paul Durand Ruel he reformed the impressionist group. Paul is credited as being one of the first art dealers to lend his support to the impressionist movement. Thanks to his contribution and the platform that he offered to the French impressionists Renoir started to enjoy commercial success.