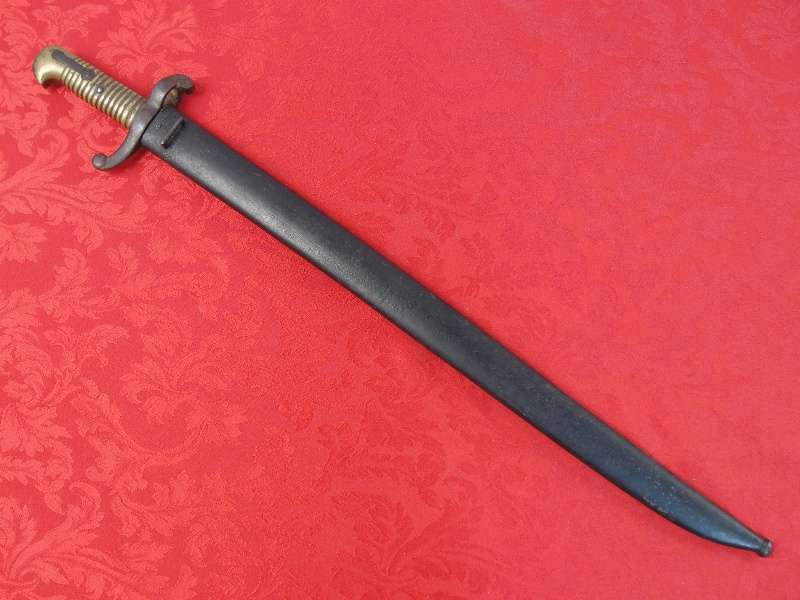 The French Type 1842 Bayonet is also known as the yataghan sword bayonet because of the shape of the blade which is curved or in other words yataghan shaped. The 1842 bayonet is almost identical to the French 1840 type bayonet. The only difference is the upper finial which is cocks comb shaped. This upper finial is on the muzzle-ring end of the cross guard. Apart from this the sword also had a re-designed external spring latch. The size of the blade was also longer than the 1840 sword. The blade on the French 1842 model was almost two inches longer than the one on the 1840 version.

Many other countries have copied this sword design including Germany, United States and Belgium. The identifying characteristic of an original French 1842 model is the marked bayonet. Also the blades were German made on the original swords. The marking will be on the back-edge of the sword, the one that is opposite the cutting edge. The markings are done in engraved cursive fashion and include information such as the month and year of manufacture and the arsenal of the sword. A typical marking would look like, “Mre d’Armes de St. Etienne 8bre 1847. This would indicate that the sword is from the St. Etienne arsenal and was manufactured on 8th, October , 1847.

Historically, this sword is very important since it was also used in the American Civil War. These swords were among the surplus that was emptied from many European arsenals. The blade on the sword was made of steel and it was single-edged and fullered. The bayonet was brass hilted. It had a steel latching arrangement on the right side. The cross guard was made of steel and it had a muzzle ring finial in the shape of a cock’s comb. The lower quillon was hooked and was of the type commonly known as the blade breaker.

The French model 1842 bayonets were manufactured from 1842 to 1866 at which point they were replaced by the French model 1866 sword bayonets commonly known as the ‘chassepot’. There were several variations of the sword that were produced at the time. It would also not be particularly difficult to find an authentic French 1842 type bayonet because they were manufactured in large quantities. The scabbards of these swords were made of sheet rolled steel and were blue in color. The scabbards also had a ball finial.