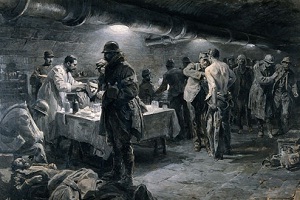 There were underground movements in most European countries under German control in WWII. These resistance movements took various forms such as propaganda, non cooperation, disinformation, recapturing towns and even outright war. The French underground of WWII was called the French Forces of the Interior.

Most of these underground outfits operated independently of each other till the Allied Invasion of France in 1944. In this war the French underground of WWII scored some key points against the Germans. They devised a Key strategy to minimize the loss of life in case of capture and they followed the ingenious pyramid structure of communication. This meant that no member of the group would ever interact with more than two other members of the group this ensured that a minimum number of members could be caught because of one captured member.

They also developed an underground railroad. This railroad was used to smuggle allied soldiers back to England or on the front liens. These networks were also used by Allied soldiers to send messages to their base units and to the smaller French underground units across the country. They also procured radios to communicate with the allied forces and other revolutionary outfits. The messages were delivered in encrypted forms so that their meaning would be indecipherable to the German army.

During the Allied Invasion all the underground outfits united under the joint flagship of Conseil National de la resistance. This organization did several things to ensure allied victory. They did the mass piling of weapons in anticipation of the Allied war. On D day, the conseil cut German supply lines and helped the allied forces to march through France. In the cities across France the underground outfits started an open war against the German forces and continued fighting till the liberation of Paris. The members did not stop only at France and also fought against the Germans in the other European countries. French Independence from Germany can be credited as much to the brave members of these outfits as to the allied armed forces.

Among the notable acts of the group were providing human intelligence resources to the allied troops, assisting the allied troops in open warfare and providing stockpiled weapons. They also assassinated several top ranking Nazi officials and ferreted French collaborators. They successfully cut off supply to the German army by destroying trains, ships and convoys. They even tapped the phones of the Paris headquarters of the German forces. As a result of their efforts Germany had to bear heavy losses. Many of these brave men and women lost their lives in this war but today France looks back at them with gratitude and pride.