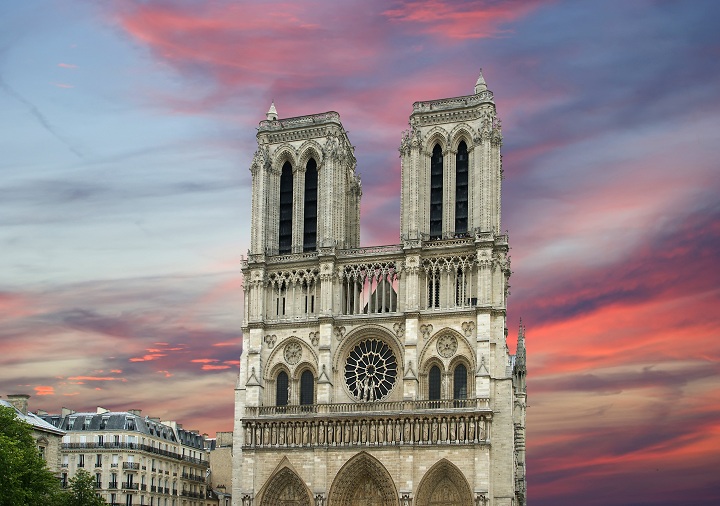 Want to learn more about the Notre Dame Cathedral of Paris? Read on for a historical overview of the construction of the finest example of French gothic architecture…

The Notre Dame Cathedral of Paris is a fine monument of Gothic architecture. The name translates as “our Lady of Paris” in French.

This is the most important cathedral in all of France as it contains the “cathedra” which is the official chair for the Archbishop of Paris. Till this day this historical structure is regarded as being the finest example of French Gothic architecture and has become a major tourist attraction for the country.

This magnificent building is one of the first Gothic cathedrals to have been constructed in Paris. The construction of this unique cathedral spanned over a long period of time. It consists of many sculptures and artwork created in stained glass. All of the artistic elements have been heavily influenced by the naturalist movement that prevailed during the time of its construction. This is what makes this church building different from others that had a Romanesque feel to their architecture.

Unique Element of the Cathedral

There are a number of things that make the Notre Dame de Paris unique. One of these things is the fact that this building was the first in which the flying buttress, which is an arched exterior support, was incorporated.

Originally the design was not meant to feature the flying buttresses next to the choir and the nave. This element was incorporated when high walls began to experience fractures as they became thinner while rising up. This was because the walls would move outwards as they would rise higher. In an attempt to stabilize the structure of the cathedral the architects introduced flying buttresses that provided adequate support.

This historical landmark suffered great blows during the peak of the French Revolution in the 1790s. During this period a great number of the religious artwork contained inside the church building was damaged and destroyed. The cathedral was restored under a massive restoration project in the 19th century.

The construction of the Notre Dame Cathedral of Paris kicked off in 1163 after the Archbishop of Paris claimed that he had a vision of a mighty new cathedral in Paris. It was under the ruler ship of Louis VII that the construction of the cathedral was initiated. Pope Alexander III is regarded as having the honor of laying the first foundation stone.

The distinctive twin towers in the west front were developed in the year 1200 and this was before the nave had reached its completion. This construction process was contrary to the conventional means in which cathedrals were erected. Since the construction of the building spanned over a long period of time, a number of architects worked on the site. This resulted in a unique amalgamation of different styles incorporated within the same church building.

The rose window level of the cathedral was completed by 1220 whereas the two towers in the west front breached their completion in 1245. The cathedral came into its complete form by 1345.