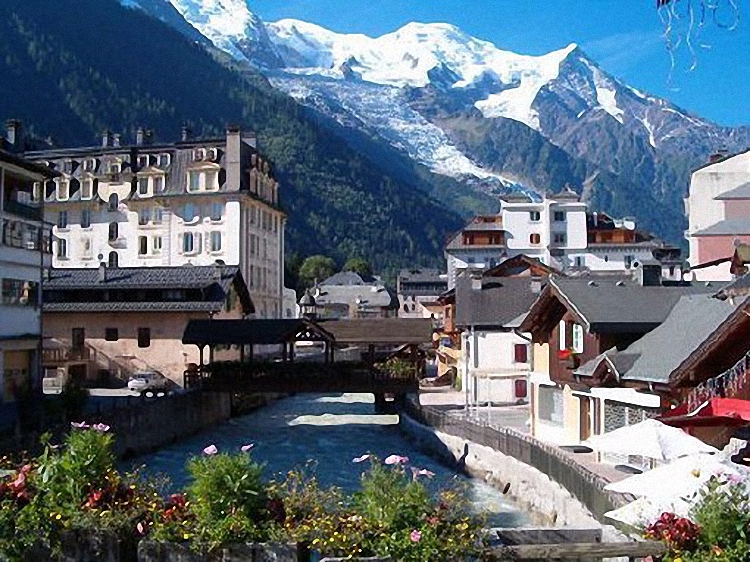 France has varying landscapes from flat vineyards to undulating mountains and snaking rivers. Mount Blanc counts as one of the major landforms in France. It is 4,807 meters high and is the highest peak in France. The country is the second largest in Europe and borders Spain, Germany, Belgium and Switzerland, among others.

The major landforms in France are the relatively flat plains that cover the central, north and west of the country. There are low lying hills and mountains in the plains. Generally, the plains stretch for miles in France making this country very suitable to plant grapes and have vineyards.

Along the English Channel, rugged cliffs are the major landforms in France whilst white sandy beaches front the Atlantic Ocean right to the border of Spain. The Britanny peninsula stretches into the Atlantic Ocean and islands with pebbled beaches dotting the coast to the south of the town of Brest. About 160 km to the southeast of Nice lies the Mediterranean island of Corsica, the largest island of France full of mountains.

Mountains pre-dominate the major landforms in France to the south, south central and east of the country. Along France’s border with Italy are the snowcapped Alps in which can be found Mount Blanc. Towards the north are the limestone Jura peaks and along the Rhine River Valley you can find the Vosges Mountains.

Canyons And River Landforms In France

The Massif Central is a volcanic and mountainous plateau. These landforms are divided by deep valleys and steep canyons. The Massif Central stretches itself right to the Mediterranean Sea. At the border of Spain and Andorrra stand the magnificent Pyrenees, the jagged mountain range to the south of France that divides France from Spain.

Rivers are major landforms in France. The Loire is the longest river in France, flowing for well over 600 miles or 1000 km. The Rhine and Seine rivers are famous rivers in France that have numerous tributaries.

Major landforms in France are made up of plains that cover the central and western regions of France making this country suitable for vineyards. The Pyrenees Mountains separate France from Spain. Rugged cliffs look out into the English Channel. White sandy beaches front the Atlantic Ocean.