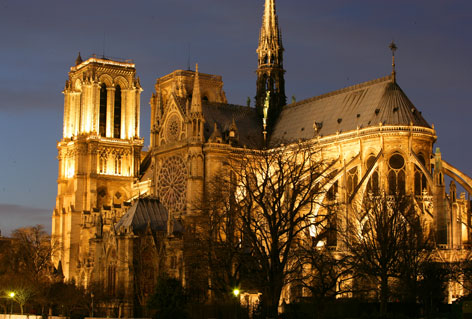 The Church was hugely influential in life in the Middle Ages. The Church influenced not only the common citizens but also the ruling monarchies throughout much of Europe. The monarchies of the continent followed the Church’s rulings and pronouncements to varying degrees; France, however, was the most committed to the goals of the Church. In response to the importance that religion had in middle age life many cathedrals were built. These grand cathedrals were built in a style much higher and larger than before not only to represent the grandness of the Church but also to accommodate a growing population. Ironically, the population growth in the Middle Ages led to more conflict between the Church and the people as cities and towns came to desire self governance.

The Power of the Church

In the Middle Ages in France and the rest of Europe the Catholic Church was the only recognized church in the land. The Catholic Church because of its power was the main unifying cultural presence in the Middle Ages. The Church was able to maintain its influence throughout Europe and France as it not only owned a great deal of land but also collected taxes and accepted gifts to raise funds. In France and other parts of Europe the Church also maintained power as all social ranks were involved in the Church and the practice of religion was only permitted through the Church.

The Church and the Monarchy

The French monarchy was strongly committed to the goals of the Church and as such many of the monarch’s made decisions with religious influence. In the Middle Ages in France it was believed that nothing reflected more glory on a Prince or King than piety and devotion to their faith. The Capetian Kings who ruled France for part of the Middle Ages were highly committed to the goals of the Church and created many policies, especially toward the Jewish population, in accordance with the Church. The Church also maintained power over the monarchies of France as the Pope had authority over the King and Queen in religious matters. The Church was also able to maintain influence over the monarchs through the influence of money and other funds that it had amassed. The Church lost much of it’s influence over the monarch as the Middle Ages came to a close and many countries shifted to more secular leaders.

In the Middle Ages the Church not only influenced the monarchy but also the general population. In France everyone, except the Jewish population, who resided in the region, used religion as a guide. Everyone, may have followed the practice of the Church in the Middle Ages however, not everyone could participate equally. The peasants in the Middle Ages were not permitted to become priests and in local towns most power was concentrated in the hands of local bishops. The Middle Ages also featured the Crusades which was a political war motivated by religion. The Church, until it lost it power as the Middle Ages closed, also held the power of the worst punishment which was the threat of being excommunicated.