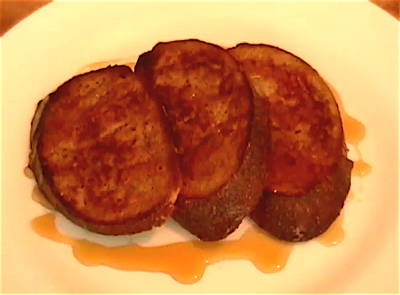 To make Baked French Toast most of the ingredients you need are likely already found in your kitchen and if not are easily found in your local grocery store. To make enough New Orleans baked French toast for four people, you will need  2 eggs, ½ cup of milk, salt, 1 tsp of sugar, 1 tsp of vanilla, ½ tsp of cinnamon, ¼ tsp of allspice, 3 tbsp of butter, 1 tbsp of vegetable oil, powdered sugar and most importantly stale French bread.  It is important that the French bread be stale otherwise the finished dish will be soggy. It does not matter how stale the bread is as long as you can slice it. In New Orleans a local style French bread is traditionally used; however, any style of French bread will work fine as long as it is stale. In some recipes French bread is replaced with sourdough bread however it is not popular in New Orleans where the recipe originates.

The first step in making New Orleans baked French toast is to create a mixture to soak the bread in. The mixture is created by whisking the eggs together. The milk, salt, sugar, vanilla, cinnamon and allspice is then added to the eggs. Next the bread must be sliced ideally into thick slices, which is then used to soak up the mixture.  It is important to allow the bread to soak for at least 10 minutes to allow the stale bread to become soft again.

Once the bread has soaked up the mixture, take the bread and brown it in a skillet with the butter and the oil. The slices of bread should brown for about 2 minutes on each side. After browning the slices of bread transfer the slices to a preheated 400 degree oven and allow it to bake for 10 minutes. After the 10 minutes have passed, turn the bread to the other side and allow it to continue baking for 5 more minutes. After these five minutes the baked French toast is finished and ready to be served. Traditionally in New Orleans, baked French toast is served with powdered sugar dusted on the top; however, it can also be served with jam or syrup.