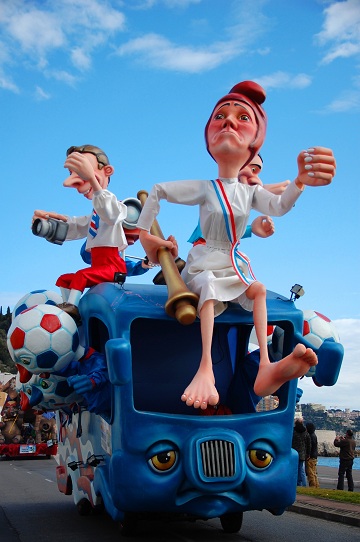 Going on vacation to Nice in France? Want to see the world famous Nice Carnival? Here we’ve put together facts & information about the Nice Carnival that you’ll want to know.

Nice, which is situated on the southern Mediterranean coast of France, is one of the most popular tourist destination in France. Every year Nice receives millions of tourists from all over the world who come to enjoy the sun, sea sand and everything else the city has to offer. Nice is also home to one of the largest annual carnivals in France, which has a history of several hundred years. In fact the whole concept of the carnival is deeply rooted in Italian culture, which is geographically close to Nice, and the Catholic religion which predominates in France.

Although the precise date of the Nice Carnival changes every year, it is always in February. Due to the Mediterranean climate Nice enjoys the weather is still pleasantly warm and sunny at this time of year and this is actually a perfect time to visit as just before and after the carnival the city isn’t so crowded, which means there are plenty of deals to be had on hotels in Nice.

Originally, Carnival was seen as a last chance to party before beginning the 40 day fast of Lent as was widely observed throughout Europe during the Middle Ages. The towns people used carnival as an excuse to eat, drink and make merry before undergoing an austere 40 days deprived of all carnal pleasures.

Today the Nice Carnival consists of a series of processions on floats, much like many other carnivals around the world. There is even a special flower procession where hundreds of different colorful flower varieties are beautifully arranged on floats and paraded past the public along the famous Promenade des Anglais which overlooks the sea.

The Nice Carnival has something of a reputation for creative intelligence when it comes to designing the floats and costumes to be used in the Carnival, and many of France’s most avant garde artists participate in the process. Every year a theme for the Carnival is set by a carnival committee and artists and designers are given a brief to fulfill. Recent years have seen the Nice Carnival becoming very contemporary in terms of reflecting current social situations facing the world as a whole. The Nice Carnival can also be credited with the birth of the giant model that has cropped up in other carnivals and festivals as far a field as the US, such as the burning man festival held in Arizona. Such huge figures, which caused consternation when they were first introduced, have been a regular feature at the ice Carnival for over one hundred years.