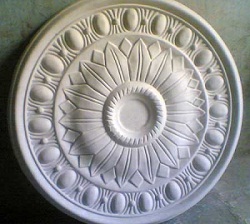 Want to know more about plaster of Paris? Need to make a plaster cast? Read on for facts and info on this versatile substance created from gypsum…

Plaster of Paris is a very beneficial quick setting gypsum plaster that has very versatile uses. It consists of a fine white powder which is known as calcium sulfate hemihydrate. When moistened and left to dry the plaster becomes hard.

In order to prepare plaster of Paris the calcium sulfate dehydrate, which is otherwise known as gypsum has to be heated up to 120 to 180°C. Special additive is added in order to retard the set, this is known as the hard wall plaster.

History of Plaster of Paris

Although plaster of Paris is widely used today its origins date back to more than 9000 years ago. Anatolia and Syria are regarded as being the birthplace of this beneficial substance. About 5000 years ago the Egyptians started making their own version of the plaster of Paris. They would heat gypsum in open-air fires and then crushed it to make it into a powder form. This would then be mixed with water in order to serve as the jointing material for their bricks and blocks.

The ancient Greeks have also experimented with gypsum to create something like plaster of Paris. They would use it for creating windows in their temples. The kind of plaster they used was in its transparent form. Similarly the Romans made use of plaster of Paris to cast statues.

With the passage of time many different civilizations experimented with gypsum calcinations and much expertise was gained through trial and error. By the1700s the city of Paris had become the center for this kind of plaster.

At that time houses in Paris used to be made of wood. Plaster of Paris would be applied to these wooden walls in order to make them fireproof. This was the law enforced by the King of France who had taken heed from the big London fire which destroyed the city in 1666. Since then continuous excavation of large gypsum deposits close to Paris has been taking place.

Gypsum by nature is a sedimentary rock. It is formed by the evaporation of seawater and is hence found trapped inside lagoons. Gypsum is loaded with many impurities and can therefore be found in a wide variety of colors ranging from white to yellow, brown, pink and gray.

In order to produce high-quality plaster of Paris great effort needs to be put into cleaning and classifying gypsum in order to prepare it for plaster. A number of different processes are used for the purpose of transforming gypsum into plaster of Paris. The first process used is applying atmospheric pressure which produces beta plaster. The other process requires elevated pressure which produces alpha plaster.