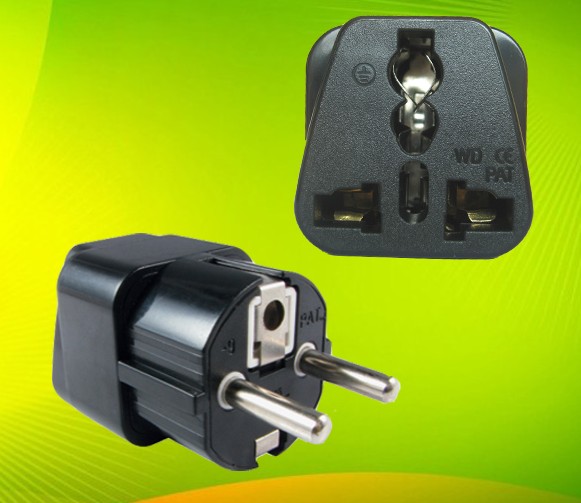 Going on vacation to France? Want to know what adaptor plug you need to have so you appliances will work. Our guide to adaptor plugs in France gives you the information you need to know.

Having the right adaptor plugs on your French vacation can save you a lot of inconvenience later on, as without it you won’t be able to use your electric toothbrush, shaver, or even laptop computer. Not only that but if you attempt to operate your US appliances from the French electricity mains you’ll end up destroying your things.

Difference between US and French Sockets

Many people who’ve never left the US aren’t aware that different countries have different shaped plugs. While in the US electrical appliances are wired with an earth wire, which means there are three prongs that go into the mains in the wall, many other countries still only use two prongs. So, an adaptor is a small piece of plastic into which you can plug in your three pronged electrical appliance, and the adapter with it’s two prongs can then be plugged into the wall.

Adaptors are not to be confused with transformers. These are responsible for changing the voltage level from the electric main and converting it to make it either higher or lower so that the current level that gets to the appliance is the right one. Transformers are usually heavier than adaptors. However, you can now buy 2 in 1 adaptors and transformers. If you’re coming from the US to France it’s important you make sure you have a transformer as well as an adaptor. Standard electrical voltage in the US is 110 Volts, while in France it’s 240 volts. Some appliances like shavers can operate at anywhere between 110-240 Volts but for things like laptops and cameras you should have a transformer.

Buying a Plug Adaptor for France

Buying a plug adaptor for France is easy. You can pick up an adaptor at most hardware stores and the packaging will specify what country the adaptor can be used in. Alternatively, airports always sell adaptors although the prices are about double what you’d pay elsewhere. Still, given that the average price of an adaptor for France is only a few dollars it’s no big deal.