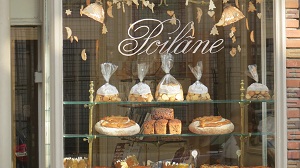 It is well known in France that Poilane bread is the best you can buy in Paris. The Poilane bakery has more than 70 years of excellence in making real French bread. Today the Poilane bakery is under the management of Lionel Poilane, who inherited the bakery business from his father about 30 years ago and has since seen its reputation and fame steadily increase. The Poilane bakery sells 15,000 loaves of bread daily, a staggering amount when you consider that’s the equivalent of roughly 2% of the French bread consumed in Paris

Poilane bread has a rich, thick and chewy consistency. Some may be surprised to know that traditional French bread is not the white bread used in baguettes that we see everywhere else. French bread used to be the wholesome staple of poor people in France. There are many outstanding French bakeries in Paris; however, one of the things that makes the Poilane bakery so special is that they refuse to bake French baguettes.

The roots of Poilane bread are believed to go back to regional French bread, but the Poilane Bakery in Paris is a modern business. Currently, the Poilane family has opened a new bakery in London which is proving very popular. Poilane is one of only a handful of internationally renowned bakeries, and is able to sustain this reputation by delivering to customers around the world with the use of international express delivery services. The Poilane bakery states that if you order bread from them, they’ll have it at your door within 48 hours of it being baked.

The Poilane bakery in Paris is situated at 8; rue Cherche Midi, 75006 Paris. The closest metro station is Sevres-Babylone. Even if you don’t speak French there’s usually someone working at the Poilane bread store who can speak some French. Although the US has strict laws about importing foods, it’s ok to bring back Poilane bread.