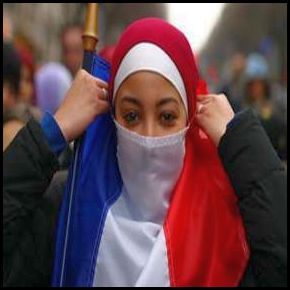 Are you interested in the religions of France? Perhaps you are doing a college project on religions in France? Here we’ve put together useful facts & information to give you an insight into France’s main religions.

France has traditionally been a Catholic country and today approximately 80% of the population of France ascribe, at least nominally, to the Catholic religion. In reality, however, France is a deeply secular country which has seen the role of organized religion in the lives of people in France diminish ever since the revolutions in in1780 and 1804. Many French people who are counted as belonging to the Catholic religion have not been. The vast majority of Catholics in France do not attend church regularly or even at all.

The Catholic Church in France is viewed as quite progressive and keeping in step with the changes that living in modern society brings. The former Archbishop of Paris since 1981, Jean Marie Lustiger, was born to Jewish parents in Paris in 1926 and converted to the Catholic religion at the age of 14.

The Protestant Religion is represented by about one million French people in France. Called Huguenots, Protestants in France were severely persecuted by the Catholic Government in France during the 16th and 17th Centuries. France’s Protestants are located mainly in the south eastern part of the Massif Central, Jura and Alsace in northern France.

John Calvin, the famous reformer from the Protestant religion was born in Northern France in 1509 and educated in Paris; however, he spent most of his adult life living and working in Geneva.

Islam today constitutes the second largest religion in Europe. There are currently believed to be about five million Muslims in France, many of whom are of North African decent.  Muslims first started immigrating to France in large numbers during the 1950’s and 1960’s when France needed manpower to sustain it’s economic boom.

The Muslim community in France has been at the centre of several controversies, including various attacks from right wing political groups during the 1980’s and more recently the issue of banning Muslim head scarves in French public schools.

Many French Muslims of north African decent complain about harassment and discrimination at the hands of the police and employers.

France has had a Jewish community since Roman times, however this was largely wiped out during the Middle Ages when they were persecuted and eventually expelled.  French Jews gained full citizenship for the first time in 1790 and since 1808 the Jewish community has organized an umbrella group called Consistoire to serve their interests. Today there are estimated to be about 650,000 Jews in France, many of whom are recent immigrant who came from Morocco, Algeria and Tunisia during the 1960’s.