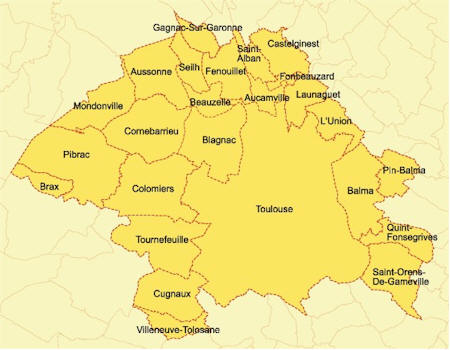 Toulouse, France is a vibrant City that offers something for everyone, the traditional and the modern, sports and spacecraft, hip hop and piano concerts, antiques fairs and Spanish Cinema weeks. “La Ville Rose” (the Pink Town – so named due to the buildings made of attractive pink bricks) is such a fascinating town it isn’t easy to just relate the facts on Toulouse, France but those are impressive enough…

The Capital of the biggest French region, Midi-Pyrenees which covers an area of 45,000 km², Toulouse is located roughly in the middle of a triangle between the Atlantic Ocean, Mediterranean Sea and the Pyrenees Mountains to the South. It is situated approximately 680 km South of Paris. The population of Toulouse is 1,117,000 including the urban and rural areas making it the fifth largest city in France. The Toulouse-Blagnac International Airport is the fourth largest Airport in France. The University, founded in 1229, is one of oldest in Europe and has more than 120,000 students making it the second largest in France. Toulouse is located on the banks of the Garonne River and has the Canal du Midi running through its centre. The Canal du Midi is the oldest canal in Europe still in use. It was originally constructed during the reign of Louis XIV by the engineer Pierre-Paul Riquet.

The sports and leisure facilities are outstanding in Toulouse. There are three major 18 hole Golf courses in and around Toulouse, 160 Parks, Gardens and Squares, 79 Sports Grounds, year round festivals covering subjects too numerous to mention here, lots of Museums including  the Georges Labit museum (Asian art and Egyptian antiquities), The History of Medicine Museum, and the Paul Dupuy museum (Applied Arts and Graphic Arts). There is also the famous Cité de l’Espace in Toulouse which has over 250 exhibits (mostly interactive) created to amuse, educate and help you experience Outer Space.

One of the ‘Greenest’ Cities in Europe with its free electric shuttle buses and over 200 km of cycle track in and around the City it is constantly adapting to modern life and hopes to be elected European Culture Capital in 2013. It is true that Toulouse has a lot to offer and although the facts on Toulouse, France are interesting in themselves they cannot convey the animated, pulsating atmosphere that prevails in Toulouse.