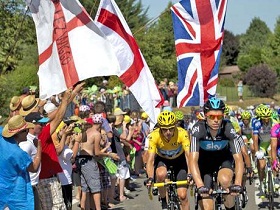 Interested in tour de France tactics? Want to know what tactics to use to win the race? Our guide gives you the facts & information you want to know.

The basic aim of every would-be winner of the Tour de France is to arrive at the finish line in Paris in the least time possible. However, although it is won by an individual it is also very much a team event. To win the race a rider must have the full support of his team who will sacrifice their own chances of winning in order to help him. Team members (known as “domestiques”) will ferry drinks back and forward to their leader, lend him their bicycle if his breaks down, allow him to ride in their slipstream so saving his energy and generally help the team leader in any way possible. A team leader needs to be an outstanding sprinter, have incredible stamina and excellent tactics. Although Tour de France tactics vary from rider to rider there are some that are mirrored in every team. Tried, tested and proven over the years to help them reach that finish line that many dream of but only a few accomplish. These tactics can be separated into two distinct categories; flat tactics and mountain tactics.

On the long, flat stages the majority of the race is ridden with the riders all bunched together in a “peloton” (herd). Occasionally a small group of riders or an individual will manage to break away from the group and gain a good lead over the others but often the result is decided in the last, exciting part as everyone sprints for the finish line. In this situation the “domestiques” will often one by one push through the herd and lead the sprint before pulling out and letting another team member through to take over. This continuous sprinting pressure serves to tire the other riders and places the leader in a good position for the final sprint of around 200 metres.

Although the flat stages are important it is in the mountains that the Tour de France is won or lost. The steep ascents and descents of the fearsome Pyrenean and Alpine peaks can make or break a leader’s chances of winning. Individual tactics count here. If a rider is a weak climber then he will try to limit his losses in the mountains and save his energy for the time trials or flat stages. Others (Marco Pantani being a prime example) will use their strength to create a greater overall time advantage over other competitors.

Lance Armstrong, the record holding seven times winner of the Tour de France is a very talented all-rounder but even he could not have won without the support of his team members, especially Jose Azevedo, and his own Tour de France tactics.