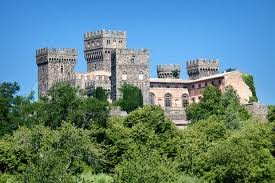 Want to learn more about castles in Tuscany, Italy? Read on for facts and info on the fine examples of medieval architecture that can be visited in the region of Tuscany…

Tuscany is regarded as being the medieval heart of Italy primarily because of the fine examples of medieval architecture that can be seen in the form of castles across the cityscape. Globetrotters from around the world visit Tuscany in order to explore the wondrous medieval castles situated along its coast and high in the mountains as well.

Many of the Tuscan castles along with ancient cathedrals and other historical buildings have been converted into museums displaying a variety of relics from the medieval era. The medieval castle structures are further complemented by the small walled villages and towns that were present in the Middle Ages. A traveler to Tuscany will be able to find castles, watchtowers, fortresses and town walls all over the territory. Many of these historical buildings have been well preserved whereas others are standing only as ruins. One of the important things to remember is that the best of castles in Tuscany are not situated along the most popular tourist routes. In fact in order to see these castles and experience the glory of medieval Italy tourists will have to take a detour.

Ripa d’Orcia is one of the oldest and most beautiful castles of Tuscany located in the Orcia Valley. The castle has been skillfully renovated and today serves as a major tourist attraction. A section of the council has also been refurbished to serve as tourist accommodation in the form of rooms and apartments. The Castle is located amidst a profound natural environment spanning a total area of 320 hectares. Ten of these hectares are covered with olive trees, whereas six other hectares have been dedicated to the growth of vineyards.

Another popular Castle in Tuscany is the Castle of Bibbione. This particular Castle was erected by the Cadolingi of Montecasioli. According to the ancient manuscripts that were discovered at the site it is believed that the castle was erected in the year 997. The Castle is surrounded by city walls, which were constructed for the purpose of defense in the days gone by. Starting from the top of one of the highest hills tourists will be able to view ancient houses in medieval villages all across the slopes ands hills below. The lands associated with this glorious Tuscan castle extend all the way down to the Pisa River.

Located on top of a hill in the heart of Chianti is the Castle of Tornano. This particular site is credited for having the most beautiful keep in all of Italy. It also features the Tornano, national Monument which is one of the finest monuments in the history of fine arts. This is a medieval castle dating back to 1100 A.D. 00. The Castle is set up among the serene  environment on a hillside that is surrounded by woods and vineyards.

The above mentioned castles are just some of the fine examples of the kind of medieval structures that Tuscany has to offer.

Italy
The Italian calendar is loaded with holidays & Festivals. Find out how the Italians