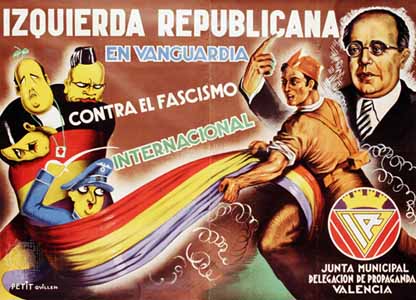 The Spanish civil war broke out from1936 and lasted until 1939. This conflict was a result of the attempt to overthrow the government of Spain by force by some illegal factions of the army. This resulted in the development of a fascist nation of Spain as the rebels emerged victorious with help from the axis of powers. However, this was also the foundation of the tensions that finally gave birth to World War II. There were many advanced military tactics that were rehearsed in this war by Germany. The entire nation of Spain however was completely destroyed by this war. Approximately one million were killed and the casualties of war were mostly left with no life after war. The war itself however became notable for the passion that people fought it with from both sides of the conflict.

Spanish civil war posters were an outlet of this passion that the war was fought with. The posters are perhaps the most prominent remains of the conflict that presented to the people of Europe and the world the tragedies of war and how the people of Spain were living through these tragedies. These posters are amongst the most important documents of the war remaining today and can be found in museums across Spain as well as other European countries. Many of the Spanish civil war posters spoke out against fascism, posters to join the army, posters against injustice, posters for emancipation of women and even posters for the awareness of various diseases. The streets were literally aflame with the Spanish civil war posters by all parties for all causes. There were posters on ruined buildings that were put up to protest against the army. They were the most significant pieces of revolt in the entire war.

Spanish civil war posters serve as sensitive memories of war. There were many people who became rich overnight in the shadow of these posters. Some of these posters urged for sacrifices in the name of Madrid. They serve as accurate testimonies to the events of war with notifications of many symbolic changes like change of street names and the national speech etc. Also there were some posters that brought hope to the people. These brought a feeling of true optimism to people who were otherwise stuck in the hopelessness of war. As such the Spanish civil war posters are the most important pieces  historical documentation about the war available to us today.