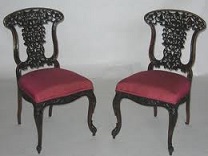 Wood carving is taken very seriously in Burma and the chairs that have been carved by Burmese carpenters are unlike those found elsewhere in the world. A Burmese carved chair is renowned for its beauty and durability all around the globe.

One of the most basic tools used by the carpenters in Burma is the chisel. The chisel is one of the basic tools used for carving wood and is made of iron and has a wood handle. There are about fifty different sizes of chisels and the chisel has a flat blade edge.
Another tool used for carving upon chairs is a gouge. Gouges are very much like the chisels, but they do not have flat blade ends. Gouges have curved or angled blade edges.

The mallet is also used to create the Burmese masterpieces that many love to sit on. A mallet is like a hammer but is made of wood entirely. However this is used more for the creation of the chair itself rather than the carving on it.

There are four parts of making a Burmese carved chair. Just like with any other piece of art, the first step of carving on the chair consists of drawing the initial design on it. This drawing is done using charcoal, to ensure that all the lines are visible and the carver makes no mistakes. The second part includes cutting out the parts that will be hollow in the final design.

The third part is probably the most extensive and tedious, as it includes carving the intended design, which was drawn earlier, on the chair. The fourth part includes the final touches to the carved design, making it neater and sometimes more intricate if required.

The art of creating a Burmese carved chair is one that has been passed on from generation to generation, and little has changed over the years. Whether you consider the quality and designs of the carving or the names of the different carving designs, you will find they are the same as they were centuries ago. For example, any carving involving a three-forked leaf is called a Thonsa-ywet, while a five-forked leaf carving is called Ngasa-ywet. If the leaves have more than five forks, the carving will be called thon-ywet. If the design used is one that was newly created, it is given the title of Ywet-sann.

One of the most famous, yet very old Burmese carving is that of flowers. Sometimes the carver painstakingly carves intricately detailed plants, including their bulbs, leaves and stems, on a Burmese carved chair.

One of the most astonishing carvings of the wood chairs from Burma has to be those related to the supernatural and monsters. One would think that the chairs bearing ghosts and ghouls will not be suitable for the home, but in fact they are one of the best additions to any living room owing to their refreshing beauty.