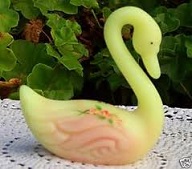 Want to buy Fenton Burmese Glass? Read on to discover the legacy behind the renowned producer of Burmese Glass Fenton…

Fenton Burmese Glass is produced by an artistic glass company called Fenton, which was established in 1905. All of Fenton’s glass products are handmade and great detail goes into making the fantastic designs.

Fenton Burmese glass is an artistic glass. The glass is opaque and is yellow at the base, gradually fading into pink at the top. This type of glass can be used as normal glass but it is usually used to make vases and other decorative pieces. Fenton glass originally belongs to the Victorian period of England. It is said that the name of this beautiful glass was set by Queen Victoria, who was supposedly reminded of a Burmese sunset after looking at its unique coloring.

It was this very coloring that captivated the attention of many towards the delicate looking Burmese glass. The process of making Fenton Burmese glass started by adding uranium oxides to translucent white glass, which gave it the yellow color. To obtain the glass’s distinct pink shade, it was heated with pure gold. The glass was then treated with intense heat, that adjusted the colors to the pale yellow and pink that the glass is known for.

The other process that created Burmese glass was known as coralene. Small beads were fastened to the translucent glass in question using an enamel paste. Then a bright light was passed over the glass, which was coated in beads and the enamel paste. The bright light reflected off the enamel paste while giving an awe inspiring glow to the surface of the glass. Sometimes the Fenton Burmese glass was also decorated, but usually it was the stylish plainness of the glass that was not only widely appreciated but also given more preference.

When many glassmakers took to making Burmese glass it was difficult knowing what piece was made where. To determine what factory created what piece, labels, both permanent and temporary, started being attached to the finished pieces of glass. A lot of glassmakers discontinued making Burmese glass because it was expensive to produce, but Fenton continued making it and they are still going strong.

One of the biggest complications of making Fenton Burmese glass these days is obtaining uranium and other substitutes. These are adding to the glory of the original Burmese pieces.  This, however, does not interfere with the market that Fenton has captured and many people to this day buy it as a collector’s item.

The Fenton Burmese glass is mould into all sorts of shapes and sold to almost the entire world. It is popular not only for its enchanting history but also for its ageless beauty. You can order ruffle bowls or fairy lamps and indulge in the beauty of this magnificent glass.