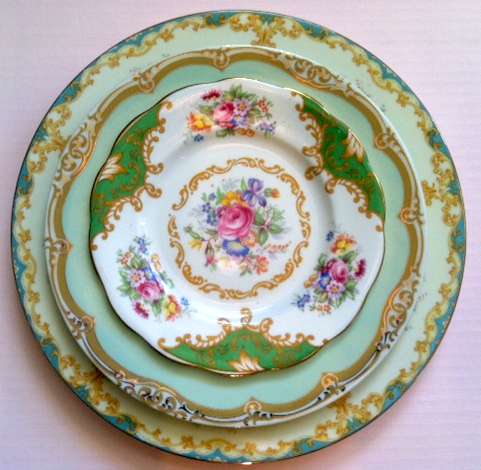 Decorating your house with beautiful, delicate antique china plates says much about the aesthetic sense of the owner. Glazed antique plates, hand painted porcelain plates and few others are much in demand by collectors around the world……

The histories of Chinese plates go back to the Neolithic age where they used terracotta to make their pottery. Then came the age of black pottery of which a number of black plates have been discovered which go back to about 2600BC to 2000 BC. The shape of antique china plates took a great leap with the manufacture of porcelain pottery. It was developed around the time of the Tang Dynasty. The material called porcelain was made out of combining kaolin, and feldspar.

With the improvement of technology ancient Chinese came up with beautifully painted China plates which were taken from as early as the Neolithic age to Hans dynasty. They were the best example of Yangshao culture of China. Between Tan dynasty and Song dynasty (960-1279) rule another art was developed which was known as glazed pottery. The plates of this time were painted with simple designs and monochromatic glaze was used to decorate. The cracked effect that it gave was retained as it made the pieces look more attractive.

Owning antique china plates are prestige symbols in modern times. There are some beautiful pieces available which are put up for auction or sold at very high prices. For example a rare Song dynasty plate made of porcelain is available which is glazed in duck blue. This authentic piece has flower motifs and silver band around it which is hand beaten.

Another example is a porcelain plate in blue. It is decorated by 4 characters called “shuang-xi” which means double happiness. This plate was traditionally a bridal gift from Qing dynasty (1644-1912). Then there are plates with bats or fish as motifs which means abundance, affluence and happiness.

Antique china craftsmanship became famous in Europe in 19th century as they learnt the art of manufacturing china. The china plates and other pieces were part of affluent households and were supposed to hold a prestigious position. A typical example is a beautiful piece produced in 1768 in a factory in Chelsea. It has scalloped edge, with leaf, butterfly and rose bud motifs all over in lovely colors.

Today the concept of antique china plates does not remain limited to only Chinese plates. The collectors can have their choice from china produced in places other than china which are equally famous. They have access to samples from Royal Albert or Wedgewood (British) Noritake (Japanese) Limoges (French) and Fiesta or Lenox (American) etc. The plates have strong influence of their places of origin and their makers.