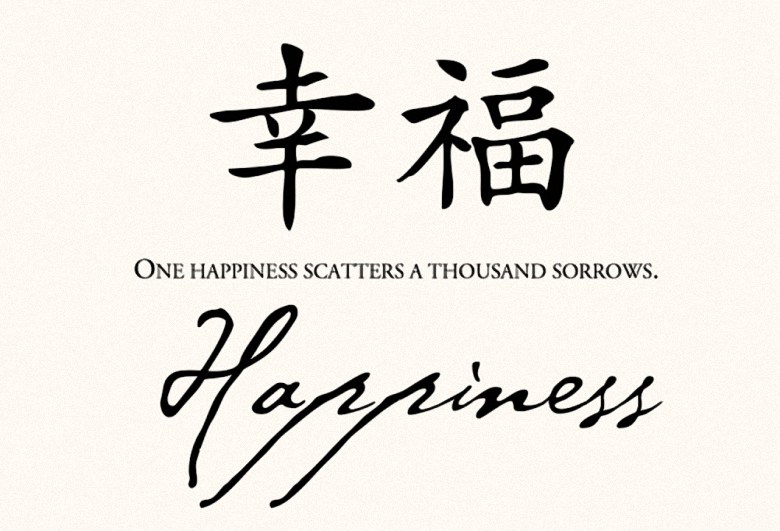 Can the Chinese happiness symbols really bring you happiness? Find out about the symbol that is truly worth appreciating.

Recent years have seen the popularity of Chinese symbols soar in the west. The young and the old alike are taking to the various symbols in some form of the other. From getting  symbols tattooed on their bodies to decorating their homes with wall hangings it seems the western world has gone head over heals over ancient Chinese symbols.

The collection of Chinese symbols is extensive but there are certain symbols that have established themselves over the others. Although the entire Chinese script is equal when it comes to their aesthetic value there are some that have a meaning that appeals more to the masses. The Chinese symbol for happiness is an all time favorite in the western world today.

Everybody wants to be happy. Chinese symbols for happiness

Why wouldn’t it be? After all everybody wants to be happy! Of course everybody has different ideas of what can bring them happiness. Some find it in music whereas others turn to God. Then there is that section of society that finds happiness in the Chinese symbols for happiness.

If they didn’t then why else would anyone get themselves stamped with the Chinese character symbolizing the feeling for life? Do Chinese symbols really have the power to generate the feeling they represent? This is contrary to reason but nonetheless it is popular Chinese tradition.

Ever try and convince a die hard Chinese symbol fan that they have no such powers? You would have quite a tough time doing so because they would argue and feel as though you mean to say the generations before them have all been misguided regarding the Chinese symbols.

Well, if you can’t come to common terms with the belief associated with symbol of happiness in Chinese, and the powers that are attributed to them then at least there would be no quarrel in appreciating them for their artistic value.

The Chinese language is a very rich and complex language which is extremely difficult to translate into a language like English. Beware of the websites that offer translations of Chinese symbols because most of them are bound to end up giving you the wrong translations. With the result that you could go for a particular Chinese symbol thinking it to have a particular meaning when it actually means something else.

With regards to the symbol of happiness in Сhinese the problem is not that grave. This is because the Chinese happiness symbol is amongst the collection of those symbols that are very popular in the west today. Hence the meaning of this frequently used selection has been identified and is easily available.

You will be able to find this symbol featured on so many articles that most people who do not even know how to read the Chinese symbols are aware of the fact that this particular symbol stands for happiness.