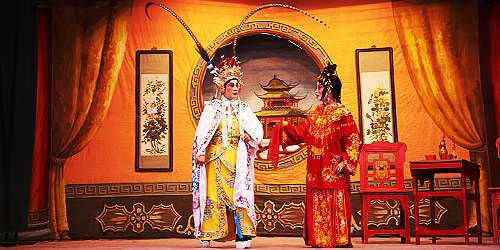 Interested in knowing about Chinese opera? Discover the different elements and themes along with the historical development of this unique art form.

Opera art is one of the branches of traditional Chinese art. This is a unique performance based art form that incorporates the use of music with powerful vocals along with mime and dance movements. One of the unique features of Chinese opera art was the fact that it also incorporated the use of acrobats.

Chinese opera art developed somewhere towards the end of the eighteenth century. By the middle of the nineteenth century it became a well known form of art that was widely being practiced by the locals and had attracted a considerable amount of attention. The Qing dynasty is the time period when Chinese opera art got a real boost as it was taken as one of the cultural treasures of its time. The halls of the royal court often witnessed opera performances for the ruling elite as part of their entertainment.

Today the cities of Beijing and Tianjin are the center for Chinese opera art. There are a number of well renowned opera performance troupes in these cities. The neighboring country of Taiwan also took on this unique art form from China and added to it its own modifications. Japan and United States have also picked up opera art from the Chinese.

The way of the opera

The traditional opera performance featured four main types of artists on which the entire performance revolved. From these main characters stemmed the rest of the acting crew. The performers were decked up in unique colorful and elaborate costumes that would catch the attention of the audience.

The performers were well trained and had amazing skills of delivery of speech along with the ability to sing and dance. The actors would also make use of acrobatic movements and one of the most interesting features was the suggestive combating and symbolic fighting that would take place on stage. The audience would relish the amazing all round skills of the performers who would move with elegance through the course of the performance.

Chinese opera art has always had an abstract flavor. The audience was made to figure out the theme and plot of the performance by looking at the different stylistic movements of the performers. The concept behind the performance was expressed using music, movements, dances and singing.

Each of these different modes of expressions had their own divisions and various styles. For example the music used in Chinese opera art is divided into two categories which are the Erhuang and Xii styles. The performance was loaded with melodies that were essentially passed on percussion instruments.

Over the course of its existence the library of Chinese opera art has produced more than fourteen hundred works. The different works take on various themes ranging from the history of China, the mythological folklores and tales and with time even the contemporary lifestyle of the Chinese people. In recent years China has made an effort to revive this dying art form by adding new elements to the traditional form of art in order to cater to the modern public.