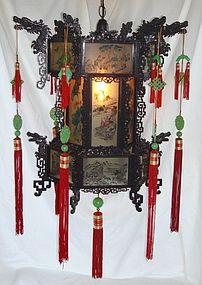 Interested in the Chinese palace lantern? Find out about this exquisite creation from the Chinese culture in our information guide.

The lantern is a prominent symbol of the Chinese culture. This unique craftwork was first developed out of necessity as there was no other source of illumination at night time. With the passage of time however they became a means of interior decoration.

The ordinary lantern transformed into the Chinese palace lantern. This was a far more ornate and highly decorated version of the orthodox lantern. The main aim of these lanterns was to serve as a center piece in an interior setting.

The variety of Chinese palace lanterns that you will be able to get in the market today is sure to add lots of drama to your house. You will be able to find these lanterns that function as powered lamps hence you can actually make use of them to lighten up your home while livening it up as well. On the other hand you can find such Chinese palace lanterns that do not function as powered lamps. The advantage with such lanterns is that they can be hung in the most artistic of places without having to worry about the kind of light they would shed.

You will often find Chinese palace lanterns decorated with images of dragons and phoenixes along with other symbols from the Chinese culture. The designers would often give the lantern a rosewood lacquer finish to add some class to the product. The use of glass panels is also a common feature in Chinese palace lanterns. A Chinese lantern could be made using a dozen or more painted glass panels. The artists would actually make use of these panels to create landscape scenes and other such imagery.

The use of tassels was also another common feature in Chinese Palace lanterns. Tassels gave the creation its distinct Chinese feel. Red and yellow were the most commonly used colors for giving the lantern its Chinese touch.

Chinese palace lanterns have today become a means of making a fashion statement. They are widely available in the market and interested individuals have a plethora of options to choose from.