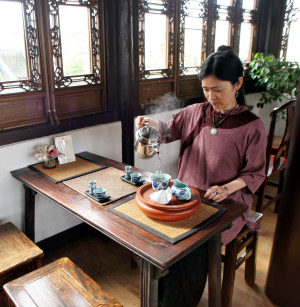 Find out about the importance of tea for the Chinese people and the traditional Chinese tea culture that has developed over time.

The consumption of tea has been an age old practice in China. In fact there is a specific culture that surrounds the preparation of tea and the way in which it is served on special occasions. There are however striking differences between this tea culture and that present in Europe.

The tea culture pretty much lives on even in modern day China. The consumption of tea is a regular practice on causal as well as formal occasions. The unique thing about Chinese tea is that it does not only serve as the nation’s favorite hot drink rather the locals make use of it in Chinese medicines and also as an ingredient in the preparation of other food items. The tea that is commonly referred to when speaking of Chinese tea culture is derived from the plant known as Camellia Sinensis.

The serving of tea at special occasions

The Chinese tea culture revolves around serving tea at special occasions. There are a number of special occasions where the serving of tea is considered to be a ritualistic practice. Serving tea is taken as a sign of honoring your guests. You will always find those who are younger doing the serving while the elderly sit and enjoy the tea. This is taken as a sign of gratitude.

There is a special holiday ritual where the elders are invited and the younger generation pays for the tea. The lower ranked people used to serve the higher ranked people. In today’s liberalized society however you will find the elderly to be pouring the tea for the youngsters although this is totally contrary to the customary tea culture.

Tea serving is a given activity at family gatherings. Other special occasions where tea serves as a means of bridging gaps is when making serious apologies to someone whom you may have wronged. It is taken as a sign of submission and regret. Alternatively it can also be used as a means of expressing thanks to someone. Newly married couples often serve tea to their parents expressing their gratitude for their services as parents.

The serving of tea is also used to connect larger families on the occasion of a wedding. Tea hence becomes an excuse for both the parties to come together. During the tea ceremony held at a wedding event the couple does the serving while calling out the guests with their official name. If someone were to refuse having tea it would be taken as a sign of opposing the marriage.

The folding of the napkin during tea ceremonies is also a traditional practice that has a symbolic meaning. Basically this action is performed in order to drive away the negative Qi energy. As it is tea is regarded as one amongst the seven daily necessities of the human body hence the Chinese thought it was imperative to rid it of the negative energy before consumption. To express gratitude to the person who serves you tea you can knock with you index finger on the table.