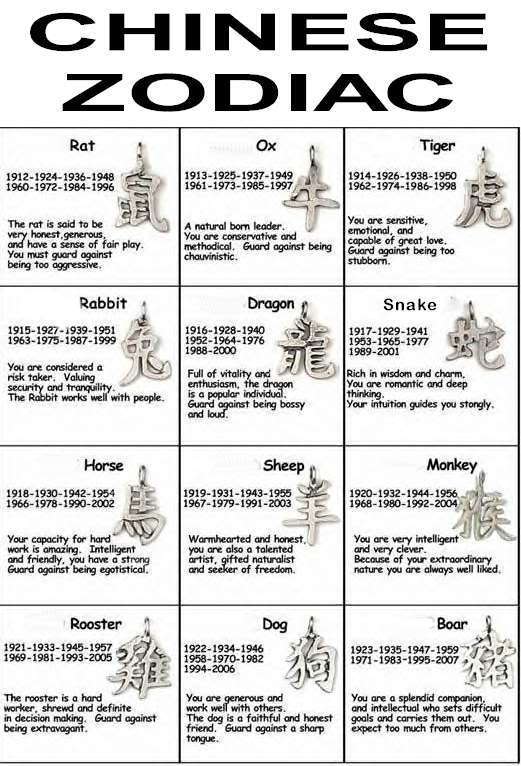 Find out about the history and legend that surrounds Chinese Zodiac Symbols.

The signs that make up the Chinese Zodiac calendar are images of different animals. The Chinese have been using this 12 year cycle for dating the years since ancient times. Unlike the western linear concept of time the Chinese lunar calendar represents a cyclical concept of time.

Since the Chinese calendar is based on the cycles of the moon it is known as a lunar calendar and functions diametrically opposite to that of the western solar calendar. On comparing the Chinese New Year to the western one we find that it begins somewhere close to the end of January and beginning of February.

Although China officially adopted the Western calendar in 1911 the lunar calendar is still used to mark traditional events and festive occasions. The Chinese New Year is one of the most prominent examples of the use of the lunar calendar in modern day China. This is the reason we find the majority of the calendars printed in China showing both the solar as well as the Chinese lunar dates.

The background of the Chinese Zodiac Symbols

The cyclical concept of time developed a physical representation in the form of animals according to popular folklore. An animal was assigned to each year which would be the official sign for that year. The twelve years have twelve distinct animals with their respective traits. Since the calendar is cyclical the same animal returns every twelve years.

The animals that represented the years took on the meaning that is similar to the concept of monthly or daily horoscopes in the west. The only difference was that the Chinese zodiac symbols determined were for the entire year. Hence people born in the year of a particular animal were believed to have the characteristics associated with that animal.

Apart from the personality traits that Chinese zodiac symbols are meant to portray which may or may not be taken seriously; they play another important function. One can use the Chinese lunar calendar to determine the age of an individual. Once you know the person’s animal sign then you can easily calculate their age by using a bit of common sense and basic math.

Where do the animals come from?

The question is how and why the Chinese assigned these animal signs to each year. Well, there is an old legend that illustrates a quarrel between these twelve animals to rein control of the cycle of years. There was a competition to race to the opposite bank of the river and the first one to do so would be the winner whereas the rest would have to follow as they finished.

The sly rat rode upon the ox’s back and just as the ox was about to reach to the finish line the rat jumped off his back and took the lead. The last to reach the finish line was the pig. Hence we find the rat to be the first with the tricked ox second and the pig coming in last.