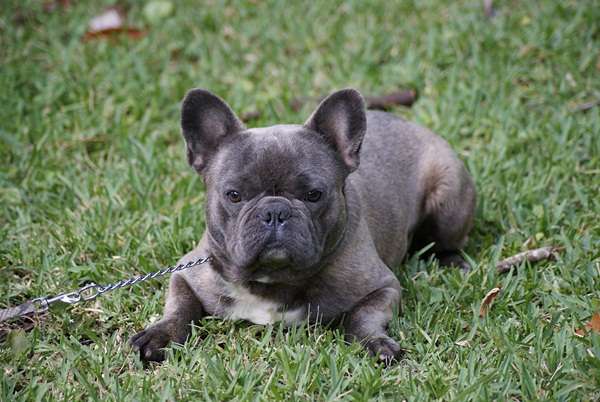 Looking for a Blue French Bulldog? Want to know how they get their blue color?Our guide gives you the facts & information you want to know.

The Blue French Bulldog is muscular and short in stature, built heavily but compactly with a smooth downy coat that imparts a superb tactile sensation. It has a characteristic flat face and the typical bat ears. The animal looks like one that has a lot of zest for life and sports an intellectual expression on its face. The Blue French bulldog with an air of curiosity and an engrossed but vigilant look etched on its face is a gorgeous dog that will simply bound into your heart.

The one physical feature that makes the Blue French Bulldog stand poles apart from the other French Bulldog puppies is the telltale color of the its coat which is close to “Blue” but yet again, still somewhat remotely. This very rare color is due to the presence of the dilation gene, d, that is responsible for the changing of the pigment from black to blue. The color in reality has a slight grey hue. But just like any other rare thing, be it the “Kohinoor Diamond” or Da Vinci’s “Mona Lisa”, the Blue French Bulldog commands a high demand.

The Blue French Bulldog actually comes in three varieties. The Blue Brindle, the Blue Pied and the Blue Fawn. The Blue Brindle breed has a “grey” blue tint on a solid blue-grey coat. The Blue Pied is the one with the dilution of the ‘d’ gene. These two variants of Blue French Bulldogs often have blue or yellowish gold colored eyes. The Blue Fawn, variation is more conspicuous by the masking points on its face and have distinctive green grey eyes. The parentage of these dogs more often than not is either fawn or red fawn parents.

The color of the Blue French Bulldog is nonetheless uncommon and a small number of dogs are endowed with this quirk of nature. Only a small number of other breeds like the Great Dane, the Shar-peis, tthe Labrador and the French Mastiff dog  have blue variants. Nevertheless this distinguishing color does not in any way make the Blue French Bulldog less arresting and endearing.

The Blue French Bulldog is obstinate by nature and training must be done consistently. The males show some aggressiveness and have to be taught to be obedient. Ruthless training measures should be avoided as it will aggravate the particular trait, neither do they act in response to such kind of treatment. Patience is a must

Grooming of a Blue French Bulldog is important. Grooming is not a difficult chore since they are poor shedders. Drooling is characteristic of these dogs and mouth washing is an absolute must.

Exercise is one activity that the Blue French Bulldog does not require to a large extent. If exerted, breathing problems are likely to develop. The puppy is predominantly an indoor one and any activity in hot weather is best avoided.

Every Blue French Bulldog is a truly remarkable dog, the company of which is to be enjoyed.