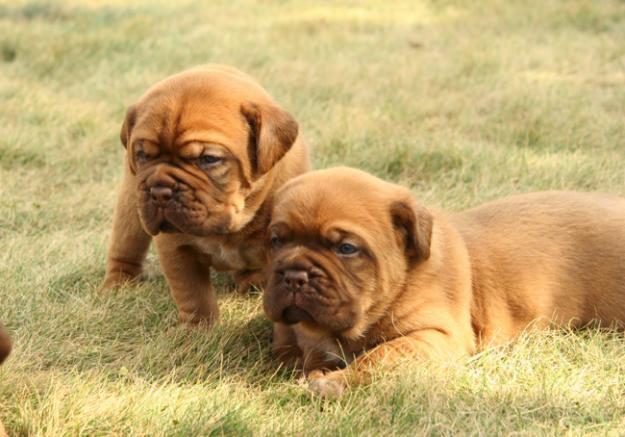 Want to learn more about the Dogue in france? Read our guide for facts and info on the oldest breeds of dog found in France…

The Dogue de Bordeaux is counted amongst the most ancient breeds of dog found in the country of France. It is popularly known as the French mastiff around the world and is highly renowned for its strength, power and imposing personality.

The French mastiff is classified as the brachycephalic. From the outside this classical French dog has a very muscular body but is a very docile creature with a harmonious temperament from within. Over the course of history the dogue in France has been used for many purposes. The French mastiff has served as the power for pulling carts and helping to haul heavy objects. It has also served as a guard dog for the elite as well as a shepherd dog.

This short and stocky dog is characterized by its heavy broad head. The standard male dog may weigh in at 50 kg whereas the female may be a whole 5 kg lighter. The desirable height range for male dogs is between 23 1/2 inches to 27 inches. Females may reach up to 25 1/2 inches at the most. Any specimen that falls out side of these weight and height bracket is considered to be faulty.

The Dogue de Bordeaux is regarded as being a very well-balanced breed of dog and is classified amongst the larger breeds. It is not particularly tall but rather incredible width and muscular body make it appear large. The French mastiff has low ground clearance which makes it uniquely different from its English counterpart.

The dog has a rather thickset body with a straight and short topline. The croup of the dog is gently rounded. The Dogue stands upon straight and heavy boned front legs that provide it with much strength and support. The tail is thick at its base and tapers towards it’s end.

The large sized head of the Dogue de Bordeaux is the most distinct feature of this breed. Without a doubt it is the most crucial breed characteristic of this breed. In fact records show that there is no other breed of canine with a larger head than that of the French mastiff. The circumference of the male dog’s head is actually equal to its height at the withers. Females tend to have a proportionately smaller head but it is still quite large. The head seems to have trapezoid shape when viewed from the front. The undershot jaw seems to have a shorter line as compared to the top line of the skull. The undershot jaw of the French mastiff is extremely powerful.

The dog has a unique face to complement its massive head. A black or red mask is always found on the dog’s face which is clearly distinguishable from the rest of the coat. It even has a muzzle which is relatively long extending below its chin. The upper lips of the dog hang thickly over the lower jaw much like the bulldog. On top of this the head sports pendant light ears that are small in size giving the dog and alert look.