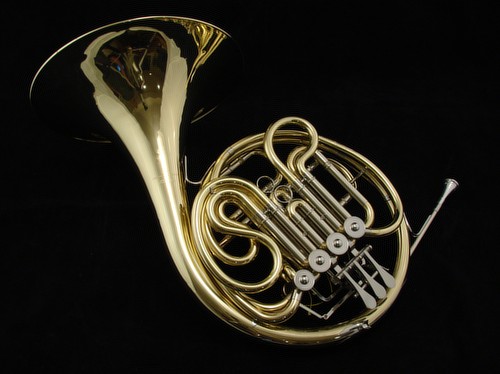 Interested in learning about the double French horns? Read our guide for more facts and information…

History of the double horn

The French horns or the cor de chasse originated in the 17th century. According to the ‘Brief History of Horn Evolution’ the credit for inventing the double French horns in the 1800s was given to Fritz Kruspe and Edmund Gumpert. The German inventor, Fritz Kruspe is said to have combined the pitches of the F and B- flat horn in the year 1900.

The double French horns come in two wrap styles, Kruspe and Knopf named after the pioneers of developing the instrument.

The modern French horn and the double French horn that we know of today, was developed in the nineteenth century when valves replaced the crooks. Heinrich Stoelzel and Friedrich Blühmel are the two people who are given credit for inventing the valve for the French horn.

The most important parts of a double French horn are the following.

The lead pipe is a long length of tube which is used to place the mouthpiece. It transforms sound quality of the horn. When the sound echoes through the lead pipe is leads to an overtone series. When playing, this occurs when the tubing is added to the mouthpiece and the player feels the buzz with pitches.

The tubing of the horn shapes the sound from the buzz and the vibration. Each different length of tube is combined distinctly to create the variations in the pitch and different tones.

The valves are operated manually by the player with the fingers of the left hand. They control the flow of air through. Variation in pressing leads to different routes for the air flow; it enters some areas and is restricted from others. This mechanism makes the tubing shorter or longer depending on the flow and alters the pitch.

The bell is a large flared cone made from metallocated at the end of the horn’s tubing. The bell amplifies the sound created in the tubing, making it louder for the audience.

There are many good brands of double French horns available such as King, Conn, Paxman and Holton among others. Purchase a horn from a reliable name to get quality and great playing experience.