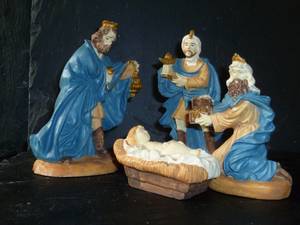 Interested in learning about traditional holidays in France? Want to know about the celebration of Epiphany? Interested in how Epiphany is celebrated in France? Read our guide for more facts and information…

The celebration of Epiphany is celebrated in many countries across Europe and around the world; however, France has their own unique traditions in the celebration of Epiphany. In France, Epiphany is also referred to as La Fete des Rois as a tribute to the Three Kings the holiday celebrates. Epiphany is a Christian holiday and is traditionally a day of feasting. The day celebrates the revelation of God in the human form of Jesus Christ.

The day also celebrates the journey of the Three Kings, Melchior, Gaspard and Balthazar, to Bethlehem.  The Three Kings made this journey by following a bright star which illuminated their path. Epiphany has been celebrated through much of the world since the 4th century. The day that the holiday is commemorated on is traditionally January 6th in France, although parts of the country choose to celebrate Epiphany on the first Sunday following January 1st.

The celebration of Epiphany also includes many traditions. In France one of the most popular ways to celebrate the day is through food. The French prepare special cakes on or near the day of celebration aptly known as King cakes. The special cakes are baked across the country; however, different regions have unique variants on the recipe. In Northern France the cakes are traditionally made of a fine, flaky pastry that is filled with an almond cream paste. In the South of France by contrast the almond paste is replaced with a fruit paste. The cakes are also available as plain puff pastry. The Kings cakes are more than just delicious snacks as they also incorporate their own unique traditions.

When preparing a batch of King Cakes it is traditional to include one bean or ceramic figure in the batter. This inclusion means that the bean or figure will be hidden in one of the pastries. Later on, when the cakes are consumed in celebration of Epiphany whoever finds the bean or figure in their cake is named King or Queen for the day and is rewarded with a paper hat. It is also traditional to serve the first pastry or slice of cake to the youngest at the table. It is similarly a practice to cut slices for those in the family who are unable to attend the celebration and to store the dish until they return.

In celebration of Epiphany King Cakes are traditionally purchased across much of Europe including France and they are available a few days prior to the celebration. If, however, you would like to enjoy King Cakes year round the recipe is relatively simple. To prepare enough pastry to serve 6 people you will begin by beating two eggs with a ½ cup of sugar. Next, 1 tbsp of cornstarch is mixed with ½ cup of cold milk and then added to the egg mixture. This combination must then be cooked with constant stirring on low heat until boiling. While allowing the mixture to thicken and cool almond powder can be added if desired, as can the vanilla and ¼ cup of butter. The recipe then requires 2 round sheets of pastry dough which the mixture is placed in between. The dish must then be baked for 30-35 minutes in an oven at 400-425 degrees. This recipe allows anyone whether celebrating Epiphany or not to enjoy one of the traditions of France’s celebration.