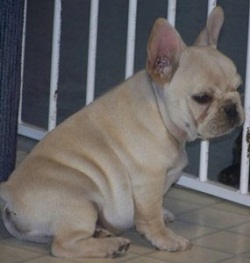 Well, you or maybe your family have decided to get a pet dog. Not something fancy but something affordable and just as good. The French bulldog has been highly recommended because of its pleasing characteristics. Why a French bulldog? Why not a French Brittany Spaniel or any other breed? Is it because you like the strong muscular squat look of the animal with its flat nose, resembling that of a face of a well punched sparring partner of a boxer and the typical ‘bat’ ears.

Whatever, the decision has been unanimously made and there is no room for retraction. But to your chagrin, you find that French bulldogs for sale are quite costly and those which are certified are even costlier. Then a friend suggests that you might get yourself a free French bulldog, not exactly free but almost, if you adopt it. That is adopt one that has been, more often than not, abandoned for various reasons and rescued.

The free French bulldog, as you might call the one that you are going to adopt can be either a pup or an adult. This depends on the amount of quality time that you or some member of your family can spend with this adorable animal. This time is to be spent mostly in housebreaking the animal if it is going to be a pup. Consistency is required in training a pup from scratch. You should understand that once a pup soils a particular place it becomes a pretty difficult job to get it to break the habit of relieving itself at the same spot. French bulldog pups have to empty their bladders quite often, sometimes as many times as their age in months and even during nights, till such time that they become adults and have been properly trained.

However cute and adorable a pup maybe, whether it is a certified bulldog, or a rare blue bulldog or the free French bulldog that you are contemplating acquisition of, they all have sharp teeth and are quite capable of widespread mayhem and destruction. Another thing that you have to know is that these pups must be kept away from children. They just do not tolerate rough play and small children sometimes inadvertently do get rough.

The adult Free French Bulldog – to continue using the nomenclature – on the other hand would have been housebroken in the kennel from where it has been put up for adoption. The people who run these sanctuaries do give their wards a fair amount of housebreaking and obedience training before they send them out to their foster homes. Further training becomes easier and though there is a saying that you cannot teach an old dog new tricks, they are still capable of learning.