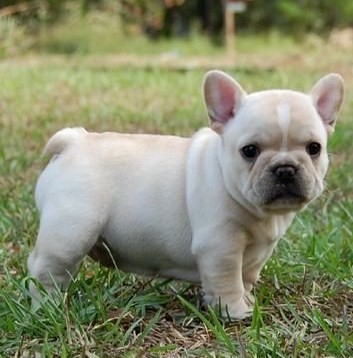 So you have decided to purchase a French Bulldog for a pet and you are looking for one that is offered for sale. Why a French Bulldog? Why not some other breed such as the French Brittany hunting dog? Perhaps it is an additional one or a replacement for a long time loved pet that had just passed away leaving behind a vacuum in your household. Maybe it is your first pet, recommended by an acquaintance for its qualities or just that you like the look of it. But when you start looking for one that is available for sale, there are quite a number of factors that have to be looked into before you clinch a deal.

French Bulldogs are short in stature, with a muscular and solid bone structure. They also are smooth coated and sport a singularly snubbed nose. Their ears have a surprisingly close resemblance to those of a bat and their tails are short and either straight or curled. They are relatively lightweight when compared with the English Bulldog but still heavy. Their temperament is gentle and they require frequent human contact and thus make adorable indoor pets. They require very little exercise and are thus admirably suited for apartment owners. One other positive quality is that they make good “therapy dogs”, especially for the elderly. They have their own quirks but these outweigh their positive qualities.

When purchasing a puppy, you have to ascertain whether both the parents have been tested for any Genetic Health problems. The dealer who has put up the puppy for sale should be able to tell you if the breeding was done when both the dogs where in their best temperaments. This implies that the dogs were not aggressive, overactive or nervous when the breeding took place. You must also make sure that the parents are not closely related.  An added and admirable selling quality of the puppy that is for sale is that it may be certified by any Registered Kennel Club like the American Kennel Club (AKC), the Canadian Kennel Club(CKC) or the Fédération Cynologique Internationale(FCI) which are dog breeding standards organizations. The requirement or not of a FCI or any other certificate determines the suitability or not of the puppy that is for sale. The color of the dog influences its qualification to obtain a FCI, AKC or CKC certification.

Much depends on where the French Bulldog is put up for sale. Is it from a pet shop, a private owner or a professional breeder? There is an appreciable difference in the source of the sale.  Obtaining a French Bulldog that has been put up for sale in a pet shop has its own drawbacks. Generally they will not have any Kennel Club Certification. Almost always they will be from “puppy mills” which churn out puppies, bred with scant regard to any genetic problems that the parents might be having; whether the parents are closely related and whether breeding procedures that are mandatory have been followed.

That French Bulldog pups are for sale by a private owner(s) is known either through  an advertisement or word of mouth information passed on through acquaintances, and the quality of these dogs are sure to be good. Though these pups may not have been scientifically bred, they almost always can be certified by some Kennel Club or other, since the owner of the parents would most probably have obtained it for the same.

Having a passably good knowledge of the qualities that a French Bulldog that is up for sale will go a long way in getting you a good, admirable pet and a long loving relationship.