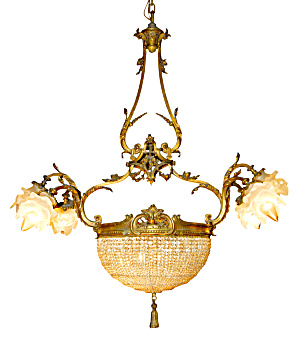 Interested in buying some antique French lighting? Do you know how to distinguish between authentic French antique lighting and reproductions? Our guide gives you the facts & information you want to know.

The term French antique lighting is rather broad in scope and used to describe a variety of different light sources that can be used inside the house. The most common of these include antique French lamps, chandeliers,  and sconces, all of which can be used in your home to add a touch of that authentic rustic French country atmosphere or even regal imperialism depending on your personal tastes. The French have a great history of craftsmanship and there are several different and distinct styles that come under the umbrella term of antique French lighting. In fact antique French lighting can be anything from renaissance to Loius XVI to Imperial to relatively more modern styles such as art deco which come from the beginning of the 20th century.

Chandeliers are the most striking, and also the most expensive, of French antique lighting fixtures. These chandeliers, which are fitted into the ceiling of the living room can very often span several meters and with their wrought iron construction can be very heavy and best installed by a team of professionals for the sake of safety. Once installed, chandeliers provide the perfect lighting to bring to life an antique French tapestry.

French antique lamps are usually made up of three parts. The most important part is the base which is almost always made from wood, although some pieces have been made using metal bases. There is a great deal of time and craftsmanship that goes into making the base of the lamp which is usually ornamented into beautiful shapes and often features some type of floral pattern. The second part of a French antique lamp is the lampshade which surrounds the light source and softens the light that emanates from it. These are usually made from cloth, very often including some type of silk embroidery for decorative effect. Of course, prior to the 20th century antique French lamps would have simply used candles, however, it is possible these days to have a genuine antique piece that has been refitted and wired in order to operate with a light bulb.