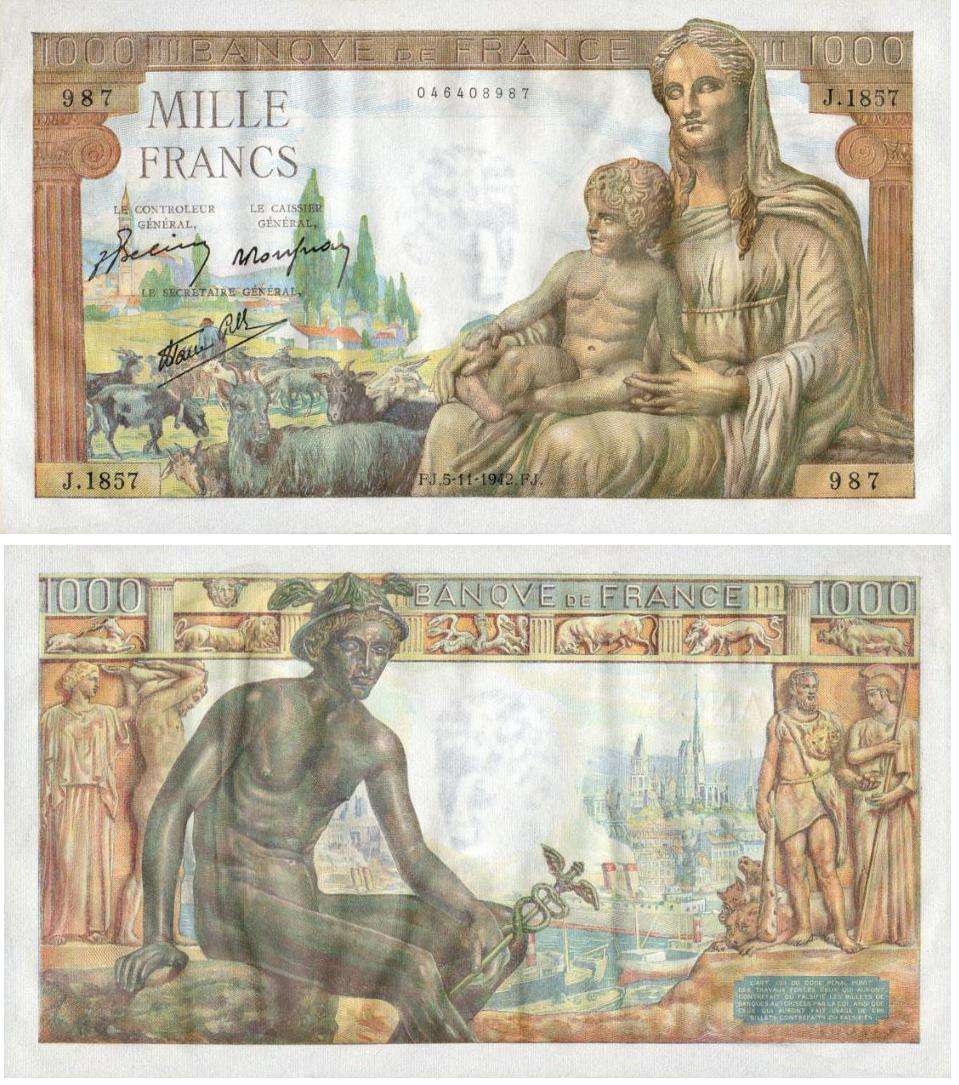 The central bank of a country is responsible primarily for establishing the monetary policy of a country along with producing, distributing and managing banknotes and coinage.

In France there is more than one central bank that is responsible for executing the above mentioned functions. Since France had initially colonized a lot of countries, the banknotes issued by them were based on regions rather than a country.

The Banque de France functions as the central bank of France, and was established in 1800 and till today is responsible for overseeing the entire French territories and coordinating with the various central banks to stabilize exchange rate from Francs to the Euro.

This bank prints its own banknotes from its facilities in Chamalières, France. Banknotes drawn by French artists are by far the most beautifully designed notes from the 20th century.

As mentioned, these were used not only in France but also in the French colonies and circulated in countries across the globe. The interesting features of these banknotes are the subject matter, the beautiful quality of engraved and lithographed printing along with the striking print colors.

The striking symbolism, allegory, color and design combined with the sharp print make each note an artwork. The French Revolution saw the increased circulation of ‘Assignats’ by the government which was in desperate need of money and printed a large quantity of these notes forcing the civilians to use them even though inflation made them virtually worthless.

Another category of French banknotes is known as the Old Francs and these were published between 1933 and 1958 and are perhaps the most beautiful of the banknotes printed by this bank.

When in 1960, the Francs were revalued to 1/100th of the previous value, the 100 Francs note became 1 New Franc (NF) and in the beginning the old notes were overprinted with new denominations, then new banknotes were titled New Francs, and finally the term New was removed.

In 1963 the French notes were printed with the denomination of Franc on 1 January 1963, consolidating the devaluation process.
From 1980 onwards, the French banknotes have become badly designed and the printing quality is terrible. However, some security techniques have been incorporated in the notes to prevent forgery.

The Trésor Banknotes were printed during World War I and World War II to assist French nationals who required the currency when in a war zone or occupied territories.

Finally, the Chambre de Commerce Local Issues were issued locally to assist merchants in small cash transactions and were of small denomination of half, one and two Francs. The Chamber of Commerce was supposed to deposit with the Banque de France an equivalent amount of cash to what was issued by them for the merchants and then they were authorized to circulate the smaller currency in the market.