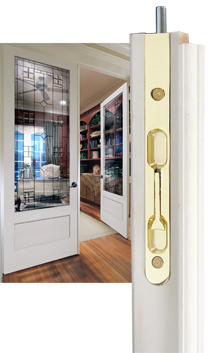 A French door astragal is basically a sealing component between a pair of doors, allowing for weather protection and preventing sound leakage, light passage and smoke diffusion between the doors. Read our guide for more facts and information…

Most of the architectural terms, such as astragal, rosette, volute, cornice, dentil and plinth made their debut during the Greek and Roman eras that are considered the golden eras of architecture. The interesting architectural details on stone and wood were affordable only to the wealthy lot. Grand European residences featured casing around door and window edges and crowns on the ceiling rims. The advent of the Industrial Era allowed for economical millwork, so that more homes could afford wood-work adornments. French doors are ideally perfected with astragals that add to their functionality, longevity and aesthetics.

While French doors invite exterior light and impart an airy feel to the home, they may not meet securely in the middle. This can draw drafts into the home and even let in rain water if the fitting is too poor. In any sound-proof partition, doors form the weakest link due to improper sealing around their perimeter. An astragal is the perfect solution, as it serves as an insulated molding that fits on one of the pair of doors and fills the gap between them. The engineering can be precise enough to make the astragal appear as if it is a part of the door, without depreciating its look. Astragals come in several colors and consumers can choose a matching color or a complementary color that suits the door trim.

An astragal is a molding fitted on the meeting edge of the inactive door with a flange on the outer side, and with strike plates and bolts on the upper and lower ends. It usually has a semi-rounded surface with two fillets on either side. The operating door closes on the astragal, just as it would on a jamb. Modern technology has facilitated three-point sealing systems for astragals that prevent water and air penetration to the best possible extent. They also utilize retractable boots, which are reinforced to endure continual use without falling off. A flush bolt system allows the boot to lift up each time the door is opened so that the threshold is cleared. Upon closing the door, the boot returns to its original position, rendering a durable seal.

Though astragal is better known for its use in double doors, it is also used with sliding doors for tighter fitting. It comes in a few types namely, flat astragal, sliding astragal and T-astragal. The flat model does not have a rabbet and is applied to swinging doors on the meeting stile. The sliding model covers the meeting joint of the door and the T-model has a ‘T’-shape that comes with a rabbet that suits the thickness of the door.

French door astragals come with latching mechanisms that allow for unobstructed double door functionality, without the use of a center post. Rust-proof astragal systems are maintenance-free and last for the lifespan of the door.