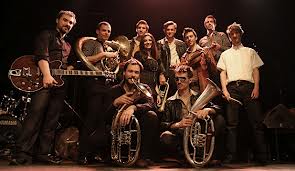 Are you interested in French Jazz Music? Would you like to hear some jazz music at a Jazz Cafe in Paris? Here we give you facts & information about French jazz music and contemporary music in France.

Jazz music first became popular in France during the 1920’s and has remained popular in France ever since. According to some sources jazz was first introduced to France by American soldiers who were stationed in France during and immediately after the First World War.  Whatever its origins, it was not long before France started contributing to the world of jazz music with its own musicians.

Among the most famous of French jazz musicians is the legendary Django Reinhard, the Belgian- born gypsy who played the guitar wit only two fingers.

Another great name from the world of French jazz music is Stephan Grapelli, the violinist who played the cafes of Paris during the 1920’s.

More recent figured from the world of jazz music to come out of France include the jazz pianist Michel Petruccini whose career took him all around Europe and America.

Indigenous French folk music is known as Chansonn Francais and has its roots with the troubadours of the middle ages. These troubadours served a vital role in the dissemination of information to a largely illiterate public at a time when there were very few means of mass communication. Among the most famous pieces of French folk music is the socialist anthem L’internationale. The tradition of Chansonn music was revived briefly during the 1930’s.

France is famous for its cabaret music which originated on the Left Bank of the river Seine in Paris during the 1950’s. It was from here that many of the French musical stars of the 1950’s and 60’s launched their careers and became famous throughout all of France.

The contemporary music scene is highly eclectic with heavy ethnic influences coming from France’s immigrant population. Popular music forms in France today include North African Rai music, Zuk music from the West Indies as well as Mbalax music from Senegal. Hip hop if also extremely popular in France with many of the top artists internationally known.