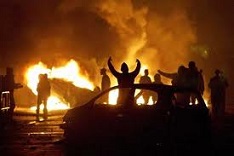 Want to know more about the French riots? Read on to discover the facts about modern day French riots….

In October 2005, France came in to what seemed to some like a civil war. Paris and other cities in France, specifically the low-income districts, were engulfed in violence for almost two months. Almost exactly the same scenario was repeated in November 2007.

French Riots – Origins of the 2005 Riots

The 2005 French riots started on the night of October 27 in the Parisian commune of Clichy-sous-Bois that is mostly populated by French Arabs of North African descent. The police while investigating reports of a break-in at a construction site, chased some French youth into an electric power substation. While hiding from the police, three of the boys were electrocuted and two subsequently died from the electrocution.

Reasons for Escalation of the French Riots

In any event, both the government and the local commune populace were polarized by a reflection of exactly these sentiments. The impoverished immigrant population felt lied to and let down by the police and the bureaucracy and the government claimed that elements within the commune were blowing things out of proportion and trying to create unrest and civil strife.

The French government’s stance was not helped by the fact that the then Interior Minister Nicolas Sarkozy had visited a poor suburb on October 25, just two days before this incident, and had railed against criminal elements within the low-income communities, claiming that they needed to be “cleaned with a power hose”. The local people felt that their innocent children had just been caught in this “power hose”.

The enraged youth from the commune came out later that night and burned fifteen cars. Police efforts to crack down on the riots in the coming days only exacerbated the situation. Interior Minister Sarkozy instead of quelling the fears of his people further fanned the flames through his “zero tolerance” policies.

The riots spread to poor suburbs in the rest of the country and the number of cars burnt during this time kept climbing to as many as 1500 in a night and police arrested up to 400 people after a night’s rioting. Curfews and bans on public demonstrations followed in the second week of November 2005.

Only after French President Jacques Chirac appeased the low-income suburbs by promising to create employment opportunities for the local youth, did the riots finally die down.

On November 26, 2007, two boys on a motorcycle collided with a police car in the Val-d’Oise department of France. Their deaths sparked off riots that led to burnt down buildings and cars.

Nicolas Sarkozy, who has since become the French President, was in China at this time. He met with the Prime Minister and the Interior Minister on November 28 to formulate a strategy to quell the riots.The French riots died down only after a thousand riot police were deployed on November 29, 2007.