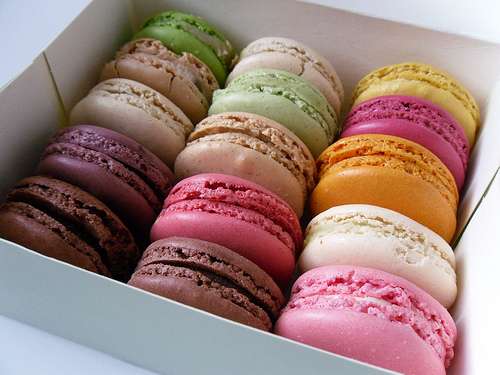 The French have been making and consuming these delicious small sized pastries since the eighteenth century. The original Parisian macaroon was an egg based pastry with almond and icing topped with sprinkled sugar.

The classic Parisian style macaroons consisted of two cookies that were sandwiched together using a flavored jam or cream. The cookies would be crunchy and chewy and every bite would lead you into the creamy filling. These bite sized delights were incredibly light yet extremely tasty. French chefs used different flavors based on the season and availability of ingredients.

Parisian macaroons have become a popular entry in most confectionery bakeries all around the world. The contents and composition of the macaroons vary according to every region. Some regions prepare them heavy and dense and others have a very light meringue based version of the pastry.

Macaroons actually appeared in Italy back in the 18th century. It is most likely that the first place that tasted this tantalizing delight was a monastery. A pair of Carmelite nuns carried forward this recipe during the French Revolution.

On being exposed to the unique flavor of the pastry the Jewish community of Europe readily accepted and picked up the recipe. From then onwards macaroons became a special celebration dessert item. For the Jewish people the macaroons were an addition to the list of Kosher food. This is because they were composed of egg whites, sugar and coconut without relying on any milk and meat products. This meant they could be eaten with any meal on any occasion.

In Paris it was the members of the Dalloyau family who served macaroons in the Versailles Court in Paris to the royalty. The ruling house at that time was the house of Bourbon. It is the family that later founded the famous gastronomy house by the name of Dalloyau family.

By the 1830s macaroons had become a popular treat in France. They were served two at a time filled with jams and served alongside spices. The Parisian macaroons widely consumed today are actually a version known as the Gerbert macaroons which were developed back in the 1880s. This unique version of the dessert item was produced in a neighborhood known as Beleville.

Amongst the many different varieties of Parisian macaroons that you will be able to find today is the double-decker French macaroon. The French patisserie Laduree is credited for inventing this version of the macaroon. Different elements like almonds, coconut, dates and chocolate are used to add flavor to Parisian macaroons around the world. Furthermore they are dyed using permissible food color to give them an intriguing look.