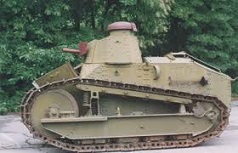 The development of tanks dates back to WWI with England being the first one to test their Mark1 tanks in 1915. Initially these vehicles were called land ships but eventually they came to be known as tanks. While the British invested all their efforts in terms of manpower and finance into the development of the Mark1 and its successor, in France there were several lines of development and this gave rise to the development of three different designs.

To begin with a major arms producer Schneider started developing the concept of an armored vehicle based on the design of a tractor. But the company did not have adequate resources to back the project themselves so it progressed at a slow rate. However, after receiving government support and army backing the company went full gear with it’s efforts. The French army along with Colonel Estienne was keen to create an armored force with these vehicles at its center.  This over enthusiasm and haste led to the production of the Char Schneider CA, which was no match to the Mark1. Its ability to cross trenches was not good enough. It had poor mobility and a disproportionate hull. Out of the 400 units that were manufactured only 130 could be put out into operation.

The next in line was the Char St Chamind, a design not created under the blessings of the government but the army had not ordered any units. This model was certainly superior as compared to its predecessor. It had a very powerful 75mm gun but many of the structural design flaws still persisted. One of them was the large body which was augmented in this version. The petro-electrical transmission used in this model still needed a lot of work and the vehicle was prone to frequent break downs.

However with other industrial players jumping onto the bandwagon of tank production innovations came fast. And it was an automobile manufacturer Renault that gave France its first modern tank the FT-17. Renault’s design was so superior that it left competitor Peugeot far behind. The FT-17 was the first of its kind, a practical light tank, an aspect which the Mark series of Britain ignored. The vehicle had proper climbing face for the tracks, The model was also the first of its kind to include a fully rotational top mounted turret. As a matter of fact the FT-17 can truly be called the predecessor to the modern day tanks.

Many other companies followed with variations in designs based on the foundation laid down by the FT-17. However not all people in the government and the army were keen on the new light tank design and many still lobbied for the older heavier tanks. Finally the Char 2C with all its technological complexities could not be produced in time to enter WWI but till today it remains the heaviest tank to have ever been operational.