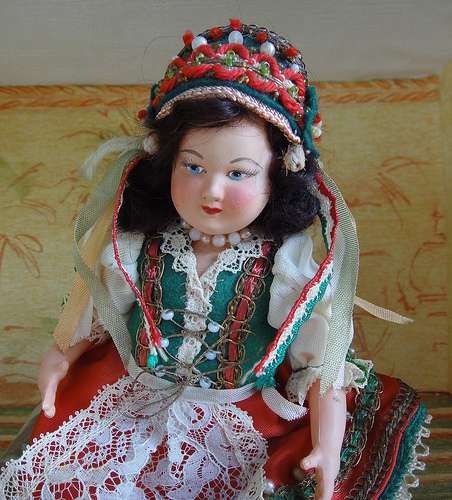 Interested in Petitcollin Old French Dolls? Read our guide for facts and info on these historic dolls…

The Petitcollin doll factory was established by Nicolas Petitcollin in 1860 and is located in the charming town of Etain, France. The facility began to manufacture dolls in 1901 and by the time the dolls became popular in the market it was 1924 and the company witnessed its first commercial success with the doll called “Petit Collin” doll launched in 1924. During the period of 1930 to 1960, Petitcollin was known as the largest and most important factory involved in the production of Petitcollin old French dolls.

This factory was involved not only in the production of French dolls, but also in producing accessories like combs. The range of dolls produced at the factory included bath tub babies, baby dolls and adult dolls. It is now the last surviving factory involved in the manufacture of Petitcollin old French dolls. This factory is located in the midst of the Lorraine Valley region of France, and is a true testament to expertise in a handicraft and sets the standards for this craft on a global scale.

This quaint factory located in the beautiful Lorraine Valley is home to an atmosphere where one can devote time and care to the creation of such invaluable pieces. The world’s most beautiful and exquisite dolls were produced and manufactured in France during the 19th century.

However when economic changes took hold of the country, many producers were hit by the impact and had to be shut down. A completely French owned company, Petitcollin managed to survive the ravages of economic turmoil. The ride was not that easy, and after 141 years the company actually went into bankruptcy. It was through the patronage and foresight of two investors Herve Halgand and Yvan Lacroix that this manufacturing facility was recovered and reestablished in 1995.

Each exquisite piece is made of vinyl which is phthalate-free and is lightly perfumed with a soft vanilla fragrance. The dolls are dressed in handmade clothing and truly make for a timeless gift to be loved for generations.

Petitcollin old French dolls are hundred percent original product of France. The manufactures use a delicious vanilla essence to perfume the doll and provide a wonderful toy for creative and imaginative games for young girls of all ages.

The most enduring feature of these high-quality European dolls is perhaps the great attention to detail that is visible in the craftsmanship. The doll comes with a change of clothing so that the new owner can take joy in dressing up the doll once in his or her ownership. The reasons that make the Petitcollin old Frech dolls popular with doll collectors and young girls all over the world is the fact that the manufacturer has maintained his high manufacturing and quality standards and that is one thing that has not changed since the factory was established in 1860.

The Petitcollin old French Dolls can be found in a diverse ethnic and multicultural selection. They make a beautiful toy or a collector’s item since the company has been using the same doll moulds since the year 1930 and each one manufactured now is just a modern version of the old classic design.