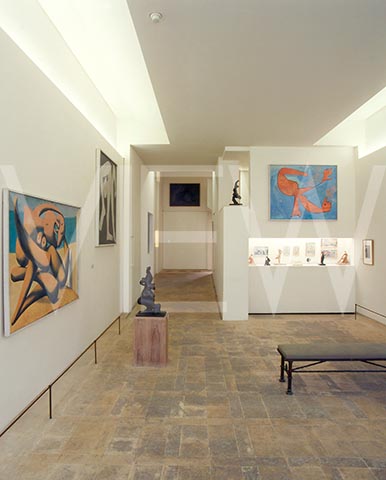 The building in which the Picasso museum is located is a large 17th century French style mansion set in quiet surroundings with closely cut green lawns at the front.  Even people who aren’t particularly interested in art will enjoy the atmosphere created by the museum building which reminds you of how Paris would have been two hundred years ago.

The Picasso museum in Paris is of course devoted primarily to the works of Pablo Picasso. However, in addition, there’s also an interesting selection of Picasso’s own personal art collection by other artists. This includes works by such figures as Cezane, Matisse and Degas.

Opening times at the Picasso Museum Paris change throughout the year. From October 1st through to the 31st March opening times are from 9.30am to 5.30pm. In the summer, from April 1st to the 30th September the Picasso museum stays open an extra half hour to accommodate the higher numbers of tourists.  The Picasso Museum in Paris is closed every Tuesday, as well as Christmas Day and New Years Day.

The cost of an ordinary ticket to the Picasso Museum in Paris will cost you €7.70 . If you’re under the age of 26 you qualify for a reduced price ticket which costs €5.70 . Under 18’s get in free like at most other museums in Paris, although you may be asked to produce ID. Entrance to the Picasso Museum in Paris is free on the first Sunday of every month. If you intend on visiting other attractions in the city, such as the Paris Modern Art Museum, then you should consider buying the Paris Museum Pass that can be used at more than 70 participating attractions across the city.

France 0 111
Have you always wanted to experiment with the French twist hairstyle? Did you always

France 0 20
Are you going on holiday to France? Do you want to see the best

France 0 8
Visiting the Louvre Museum in Paris? Want to know about guided tours at the

France 0 16
Are you looking to rent a river boat in France? Perhaps you’d like to

Chinese Calligraphy Symbols
China
Discover the brilliance of Chinese calligraphy symbols, their history and their usage in today’s
0 13804

Chinese Family Symbols
China
The Chinese symbols for family occupy a special place in their culture. Find out
0 5585

Rare Argentina Stamps
Argentina
Interested in rare Argentinian stamps? Want to know which stamps from Argentina are most
0 5455

Ancient China Social Classes
China
Interested in the social structure of ancient Chinese? Want to know more about the
0 2850