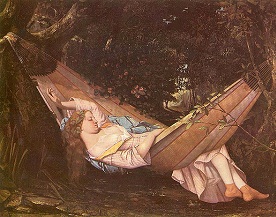 Due to considerable developments in French painting since the 17th Century, France was well poised by the 19th century to take Europe by storm with innovations in painting and did indeed lead the way in developing many new schools of painting during this period.  Romanticism held sway over the world of French painting for much of the 19th centuries with France producing great painters such as Theodore Gericault and Eugene Delacroix. Although Gericault is often credited with having started the romantic painting movement in France, his early death prevented him from reaching his full potential and it was Delacroix who carried the mantle for French romantic painting in the 19th century. Delacroix was inspired by themes taken from the histories of many different countries and painted dramatic pictures, perhaps the most famous of which is called Liberty leading the people which was painted to commemorate the revolution in France in 1830.

The Barbizon School was the next major development in French painting to occur in the 19th century as they brought about significant transformations in the way landscapes were painted. Named after the village where its founding members used to paint, The Barbizon School included such prolific figures as Camille Corot and Jean Francois Millet. One of Millet’s most famous and enduring works is called Angeles and can still be seen hung in the living rooms and school halls of houses and schools across much of rural France today.

Realism is one of the major schools in French and European painting from the 19th century.  As the name suggests, the aim of realism in painting is to show things as they really are, and during the 19th century this was especially controversial because paintings in France done in the style of Realism often showed the stark reality and harshness of life for many French people; something that had never before been done through the artistic medium of painting. Gustave Corurbet, one of the primary figures in 19th century French realism was noted for his depictions of the French working classes which showed the often abject conditions in which they had to live.
Edouard Manet, on the other hand, used realism in his paintings to depict the every day lives of the middle class in Paris.