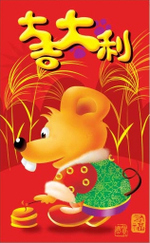 The rat occupies a special place in Chinese tradition. Find out about the Chinese New Year of the rat and why it is considered to be so special.

Not many people would like to associate themselves with the image of the rat outside of the Chinese culture. For the majority of  westerners the rat is a tiny, filthy, shady character that dwells in the dirtiest of places. On the contrary the Chinese thinkers known for their observation skills draw a completely different character sketch of the rat.

Intelligence is one of the virtues attributed to the rat. The Chinese have also observed the rat to be a hardworking and creative animal that likes to be in control of things. In fact they even classified the animal as a perfectionist. These are some of the qualities that the Chinese philosophers have observed in this particular animal.

Year of the Rat

As has been the Chinese tradition for centuries that each year has a special animal assigned to it. There is a whole system and a legend behind the assigning of the animals to the years. Basically there are 12 animals that function on a twelve year rotation according to the lunar calendar that the Chinese use.

The rat holds a very special place according to ancient Chinese tradition. Legend has it that the twelve animals that form the cycle were made to compete in a race. All the time the ox was leading the race without knowing that the rat was riding on its back. Just when the ox was about to reach the finish line the rat jumped off his back and claimed the first position.

The rat is thus renowned for his innovative personality and stewardship. The cunning animal is admired for its ability to dig through all sorts of trouble and find a way to achieve its purpose. Sharpness of mind is a key feature of the rat’s personality.

Another interesting aspect about the animals of the 12 year cycle is the compatibility issues. How the Chinese philosophers came up with these connections is unclear but they have drawn conclusions as to which animal sign is compatible with another and which is likely to have confrontations.

Amazingly the rat has great compatibility with the monkey. Where do they get this from? Who knows? But nonetheless this is what the prevailing beliefs are in China. From ancient times the year of the rat has been welcomed by the Chinese as a sign of protection and prosperity.