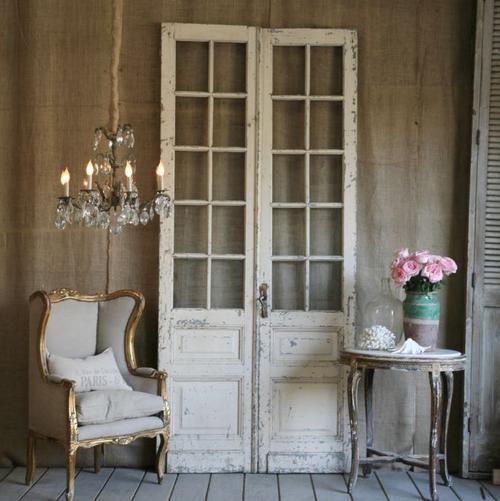 Want to buy antique French doors? Do you know how to tell an authentic French antique door from a fake? Our guide gives you the facts & information you want to know.

Modern French doors are currently very popular in older style homes around the world, in addition to antique French lighting. However these doors have a history that dates back to the early 18th century. The style of these doors has inspired the designs of many other doors and home wares that are common today. These doors were often accompanied with matching balconies and lentils as well as furniture – such as the antique French table– in the same style. Any trip around Europe or parts of America will show that this history still lives on in many homes.

These doors were originally made of Pine, with wrought iron to add style and structure. As the glass industry developed, French antique doors were more and more commonly built with glass windows embedded. This added to their style but also to their expense.  These glass additions to the French doors became so popular that a new industry of French windows developed, often supported with the wrought iron that so often accompanied French antique doors. As these industries evolved, different and more exotic timbers were used to build the doors. Oak was introduced along with cherry and walnut wood.

The wrought iron industry took off at around the same time period as antique French doors. Many related products were made including entrances, gates, unique pieces, fencing and elegant windows. Travel through any European country today and in many parts of America, this influence is recognizably strong in the architecture of houses across the world. The style, strength and price of French antique doors as well as wrought iron pieces made them so popular that they are part of most furniture junkyards. If you plan on purchasing doors from these places or from eBay, you will probably need them striped and polished by a professional carpenter in order to ensure it does not give a negative effect to your planned building.

Due to the sheer amount of these doors and windows that were produced, it is not too hard to find a reasonably priced 19th century piece as well as many people who will fit, stain and polish the antique doors that you purchase. Also popular in the modern era are modern doors manufactured in the style of the old 18th and 19th century doors. These are much cheaper than their authentic original pieces and can sometimes look even better. However if you really want true history, the early antique doors are what you should look out for.