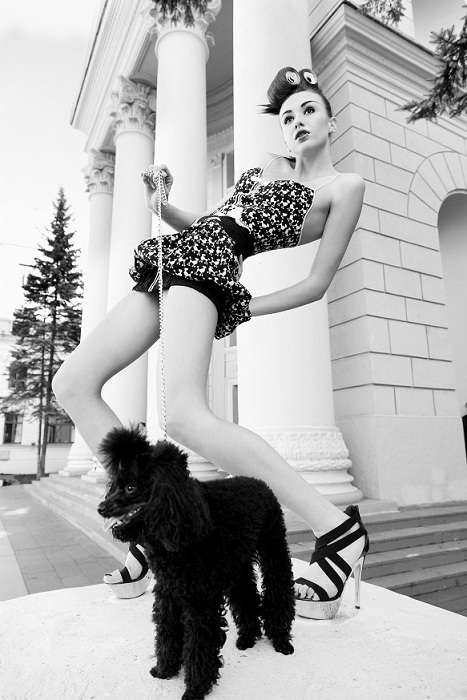 If you want a dog with a svelte look and also want to show it off, both the champion French bulldog and the French Poodle are ideal dogs to own. A majority believe that its origin is France and a small minority attribute its origin to either Russia or Iberia. Whatever its origin, it was the French who developed it to the modern breed that it now is. The name Poodle is a derivative of the German “Pudel” which is a short form “Pudelhund” meaning “Water Dog”. The French Poodle was originally used as a gun-dog for retrieving waterfowl, an association with water that probably led to its German name.

The French Poodle is in reality, full and thick coated but hunters clipped the dog’s thick coat to help him swim, leaving hair on the leg joints to protect them from extreme cold and sharp reeds. This clipping caught on as a signature characteristic for the French Poodle but the style of the clipping largely depends on the owner ranging from the positively beautiful to the downright bizarre, depending upon the owner’s and the viewers point of view. One man’s meat is another man’s poison – beauty is in the eyes of the beholder; so the sayings go. The basic styles of clipping are the “Pet”, the “English Saddle” and the “Continental”. Only these styles of clipping are admissible in shows.

The French Poodle comes in three different types; the Toy, the Miniature and the Standard. The one and only distinguishing feature being the shoulder height of the adult. The French Poodle also comes in a multiplicity of colors, black, blue/charcoal, white and apricot to name a few. They also come in diverse combination of colors though these multi-colored French Poodles are not recognized by the American Kennel Club alone.

The physical characteristics of the French Poodle are unique. Anyone can look at a Poodle and say – “Ah! this is a Poodle”. The height ranges from 15” and greater for the standard, less than 15” to greater than 10” for the miniature and 10” to less than 10” for the toy. The French Poodle carries its head in stateliness and is elongated with long flat ears. It eyes are intensely expressive, either in black or brown.

The French Poodle, like the Blue French bulldog,  is happy-go-lucky, amusing, exceptionally intelligent and sensitive. The breed is an obedient one and is adept at learning tricks and can be seen in circuses, predominantly as a star attraction, where they perform in pomp and splendor. That the French Poodle seems to have an uncanny knack for understanding human speech is the considered opinion of many a French Poodle owner. The French Poodle gets along famously with all members of a family, from the oldest to the youngest and in fact feels disappointed if left out from family activities. It is somewhat fiercely protective and makes a good watch dog.

For the French Poodle, exercise is an absolute must, with a mandatory daily walk. They enjoy a good frolic in open spaces, are exceptionally fond of water, true to its derived name. Grooming is also another must. Generally the “lamb” clipping, bringing the coat to look rather like a lamb is preferred since it is easier and cheaper to maintain instead of the more fancier ones that require the services of an outsider. On the whole, the French Poodle is an adorable dog that can be reared for its versatility.