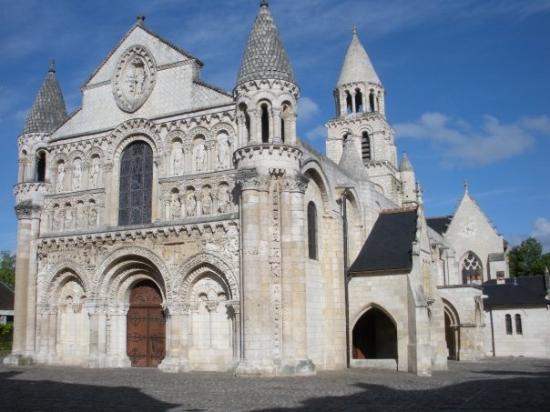 Poitiers is a small city located in the centre west of France. Poitiers is in the department of Vienne in France. With a population of less than 150,000 Poitiers is the smallest city in France, but with plenty of charm, it’s well worth including this quaint little French city on your list of places to visit while on vacation in France.

If you’re going on a self drive holiday to France, you’ll be pleased to know that Poitiers is well connected to the extensive road network in France. Otherwise, Poitiers is best reached by train; it only takes an hour from Paris using the high speed TGV train in France.

Poitiers as a Historic Vacation Spot

Part of the attraction for people coming to Poitiers on vacation is the fact that for such a small place it has a long and important history. Several famous battles took place in Poitiers throughout history.  In 507AD King Clovis I of France defeated the Visigoths in battle in Poitiers. Five centuries later in 1356, the Black Prince of England defeated the French army of King John in Poitiers.

If you’re interested in the history of education, you’ll enjoy a vacation in Poitiers because this is where one of the oldest universities in France is located.  Steeped in more than 700 years of tradition, many famous French intellectuals and thinkers have passed through the university in Poitiers over the generations.

Even if you decide to vacation in Poitiers outside of the summer season there is still plenty to see and do. Poitiers has many museums and art galleries. The most famous attraction for people on vacation in Poitiers is the Baptistry of St John. This is a great place to see some excellent examples of French sculpture.