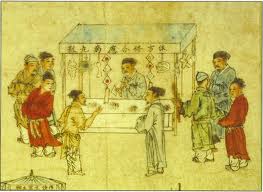 Daily life in Ancient China is as mysterious as it is old. Ancient Chinese rituals, society, customs and way of life are topics of interest to historians and students alike. If you want to know about life in ancient china read this article …

The Chinese society was structurally complex and not much is known about it. Research is still on. Life in old Chinese society on a normal working day was hard and industrious for the farmers while luxurious and laid back for nobles and merchants.

There was a wide demographic gap between the farmers and kings and nobles. The farmers were far more in population as compared to nobles. They were economically exploited and were made to work very hard. The nobles lived in luxurious palaces while the farmers in China survived in small huts. Naturally the nobles were highly regarded and lived with great riches.

The women of ancient China were not empowered in their society and male domination was very prevalent. The women were asked to take care of the children and household chores whereas the men worked in farms. The women never had their choice in marriage and were not included in any decision making regarding the household or farms or any important affairs.

The Chinese had many peculiar customs such as foot binding. Girls at the age of puberty were made to go through this painful practice. Their toes were broken and bandaged. This normally reduced the size of their feet. This process continued for a long time.

Ancient China practiced mainly three religions namely Buddhism, Confucianism and Taoism. They had a rich spiritual heritage and they believed in YIN and YANG; the male and female energies which complimented each other. They constructed large Pagodas to worship.

The ancient Chinese were master creators, artists, craftsmen and warlords. They created paper, gunpowder for battles, matches, cannons, compass, umbrellas and many more. They created many artifacts. They developed many martial arts and other art forms such as calligraphy. They used coins with holes in them. As there were no banks at that time they used to collect the money through strings in the coins.

Ancient China was ruled by many dynasties and was constantly plagued with war.
The peasants celebrated spring which was a very important festival in their life.  It was celebrated during spring to welcome a good harvest and good fortune. Usually young men and women paired up and sang and danced. Like today, even in ancient China the Dragon was a sign of good luck.