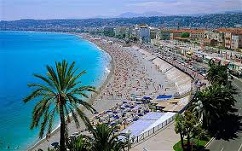 Facts & information about the main tourism attraction in Nice have been included in this article.

Nice is one of the most popular and stylish tourism spots on the south coast of France. Nice is often referred to as the treasure of the Côte d’Azur. Nice possesses a unique atmosphere that draws in a great deal of foreign and domestic tourism in France. Famed for its old cobblestone streets, Nice is a city with rich historical and cultural heritages which are both reasons for the high level of tourism in Nice.

Nice is home to a famous carnival that takes place every year towards the end of February. The carnival, which is a great booster for tourism in Nice, involves a procession of floats, thousands of people in clad in brightly colored costumes and a grand fireworks finale near the beach in Nice at the end of the night.

The main religion in France is the catholic branch of Christianity. Every city, town and even some villages in France have their own patron saint. The patron saints of Nice are St. James and St. Peter. An interesting and different tourism attraction in Nice is the religious processions that are held in honor of the town’s patron saints which takes place every June.

The Nice Jazz Festival is a major tourism pull for Nice during the summer. Jazz music in France is very popular and every July the best French jazz artists, as well as many foreign ones, descend on Nice for a week of pure unadulterated jazz heaven.

For those more interested in modern attractions, Nice can also offer plenty of shopping and night life entertainment. The long beach in Nice is simply beautiful and big enough to rival any other centre of European tourism, making Nice an excellent vacation spot.

The temperature in Nice makes the pebble beach an excellent relaxation spot. The waters are warm, clear and close by to two of France’s other Mediterranean coastal tourism hotspots:  St Tropez and Cannes.

Traveling through France using the excellent trains in France make getting to Nice from Paris easy. Visitors to Nice coming from abroad, whether for business or tourism, will be pleased to know that Nice also has a modern International Airport just a few kilometers outside of town. Most people coming to Nice for tourism find it easy enough getting around town on foot as there are plenty of shops and restaurants all over Nice. The charming Mediterranean atmosphere of Nice also adds to the enjoyment of walking and is a good way to burn off the fat from eating all that regional French food.

While driving in France in general is possible, one has to be aware of car crime which is unfortunately prevalent in the south of France. However, don’t let this put you off the idea of a self drive holiday in France.